The Lewis County High School Lady Panthers and Panthers traveled to Hampshire for rematches with the Lady Hawks and Hawks in their final action before Christmas on Thursday, December 19, 2019.

The Lady Panthers, hoping to avenge a season-opening loss at home a month ago, benefited from having all players available in this matchup. The Lady Panthers stumbled out of the gate on the road, struggling to score only 6 with Serenity Warman having 4, while the Lady Hawks pulled away early to a 21-6 first quarter lead.

It would be the only quarter of the night that Lewis County would be outscored. Anna Feichtinger led the second quarter surge with 8, as the Lady Panthers hit their stride outscoring Hampshire 20-12 and closing the halftime gap to a 33-26 Lady Hawk lead.

With points hard to come by in the third, the Lady Panthers 9-6 quarter made it a 39-35 Hampshire lead with 8 minutes left to play.

With the win the Lady Panthers end a six-game losing streak and improve 2-8 on the season. With the loss, the Lady Hawks dropped to 6-4.

The second game featured the 6-3 Panthers, coming off a road win at East Hickman, facing the winless Hampshire Hawks they defeated 49-23 a month ago. Ethan McCann played a prominent role in the early Panther success, scoring 6 points in a 17 point quarter for Lewis County, as they took an early lead 17-11 on the road.

The Hawks stormed back in the second, outscoring the visitors 23-14. Levi Thompson kept the Panthers in the game in the quarter, scoring 7, but it was not enough to hold on to the lead at the half as the Hawks held a 34-31 lead at the break.

The Panthers picked up the defensive pressure and limited the Hawks to 3 as they reclaimed the lead with a 10-3 third quarter that saw Slade Moseley drop 5, giving Lewis County a 41-37 lead, moving into the fourth quarter.

The fourth was a hectic back and forth period in which the Hawks frantically tried to stay in the game, but Cade Banks' 10 points helped the Panthers pull away to a 62-54 win.

Ethan McCann and Levi Thompson each had 14 for the Panthers, Cade Banks and Slade Moseley each added 11, Huntlee Pace 10, and Dyer Barnes 2.

The Hawks were led by Hunter Jones with 20, Cameryn Bass with 16, Ethan Bowden 9, Errette Delk 7, and Kendall Morton 2.

The Panthers improved their record to 7-3 as the Hawks remained winless at 0-10.

The Lady Panthers and Panthers returned to action on Friday, December 27 as they began play in the Above the Rim Christmas Classic at Hickman County High School. The Lady Panthers were scheduled to play the Page Lady Patriots in the first round and the Panthers to play the Battle Ground Academy Wildcats. 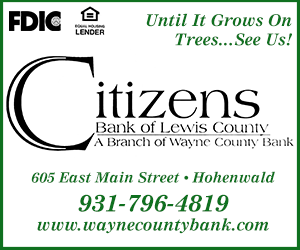