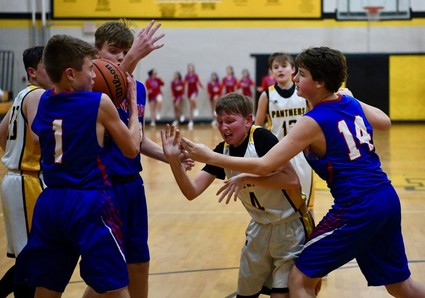 The Lewis County Middle School Lady Panthers and Panthers played in the play-in round of the TMSAA Area Tournament held at E.A. Cox Middle School in Columbia on January 17, 2020.

The Lewis County boys faced the Summertown Eagles for the third time of the year. Summertown won both previous matchups during the regular season.

The Panthers played a very good first quarter after an early 7-0 run by the Eagles, with Hunter Arledge and Timothy Brown each contributing 3 as the Panthers trailed 14-8 after the first six minutes.

The Panthers held close again in the second quarter as Arledge droppe...