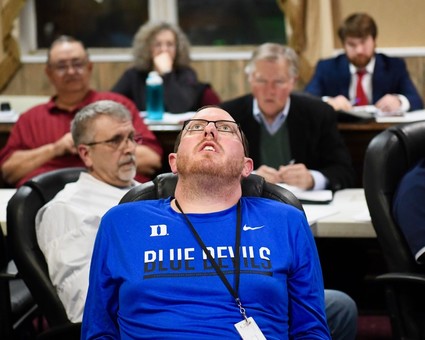 Lewis County Commissioner Aren Ragsdale expressed frustration Monday during a discussion of proposed increases in commercial rates for solid waste disposal. A number of business owners addressed the Board during citizen input to protest the fee increases. One business, Big John's Barbecue, would see rates increase from $240 per year to $350 per quarter, if the rate increase passes. The measure was tabled Monday by committee chair, Ronnie Brewer.

Ralph Tackett of Ralph's Automotive, Attorney Caleb Thomas, David Ashmore, Kenny Brown of Rockhouse Coffee Co. & Event Center and Ben Floyd of Floyd Appraisal Service were among those who addressed the Board during a time of citizen input.

Mr. Tackett called the increases "absurd" and requested the committee "go back over your figures." Rates at his automotive shop were projected to increase from $180 to $600 per year.

Mr. Thomas pointed out, just as in Newton's Third Law, the fee increases would likely cause business owners to react by raising prices for consumers or firing an employee, citing a couple of examples. "That money will go somewhere," he stated.

"The general perception is I'm a rich man. I've been told I'm rich because I own a business," David Ashmore commented as business owners in the audience laughed.

"To dump it all on our business folks is unfair," he added. "We need a little time to look at it."

Mr. Brown warned some businesses such as his coffee shop cannot handle increased fees and taxes. "If the cost of business continues to go up, we would no longer be here," he continued.

A motion by Commissioner Bill Dyer, seconded by Commissioner Aren Ragsdale, to move a vote on solid waste fee increases up in the agenda failed by a 10 to 8 voteMike Papineau of United Waste Haulers presented a possible solution to the solid waste budget shortfall in the form of a proposal.

Lewis County currently has a contract with United Waste Haulers for household trash disposal at the rate of $56.19 per ton.

Mr. Papineau proposed to purchase 170 acres adjacent to the Lewis County Transfer Station with the intent of handing the "keys" to Lewis County for management. He further proposed he wished to have the land classified as a Class III landfill to accept Construction Waste, the same classification as the current Lewis County Landfill. Papineau would pay Lewis County, based on 2019 figures, an estimated $452,90.27 for the option of disposing of construction waste.

In 2019, United Waste Haulers received 26,605.31 tons of construction waste at the Mount Pleasant facility which was hauled to Cherokee, Alabama at the rate of $17 per ton.

The proposed expansion of Lewis County Landfill would be permitted and governed by the Tennessee Department of Environment and Conservation, and would be used exclusively by Lewis County and United Wast Haulers. "This will give the Lewis County Class III Landfill 60-70 years of additional life," the proposal read.

Lewis County would have operational control of the facility and could at any time refuse materials that did not conform to standards.

The property is adjacent to the current landfill and backs up to Duchess Lane. A current tax card for the land has it in the name of the late Kenneth Turnbow.

Mr. Papineau stated he had the land under contract but had not closed. He offered he could begin bringing construction waste as soon as the Board approved the action, as early as next week.

Fielding questions from the Board, Mr. Papineau asked if the Board would be willing to consider the proposal.

Commissioner Connie Sharp made a motion to perform a feasibility study with Commissioner Fite seconding and a unanimous vote following with all commissioners to study the proposal.

Commissioner Ronnie Brewer, with a quick second from Commissioner Robert Brewer made a motion to table a resolution to increase commercial rates. "Before we throw that on everybody, let's make sure that's the only option we have," Ronnie Brewer said.

Discussion ensued resulting in a call for the question by Commissioner Patrick Halfacre. The Board voted unanimously to table rate hikes.

Tuesday, business owners expressed fear and anxiety of increases, noting hesitation to expand operations in some instances due to the possibility of increases.

See a list of businesses with current and proposed fees 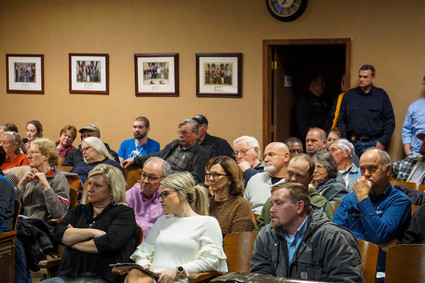 Lewis County Courtroom was filled Monday evening with residents and guests, including the 2020 Leadership Lewis Class, who had questions for the Board of Commissioners regarding proposed increases in Commercial Solid Waste fees.