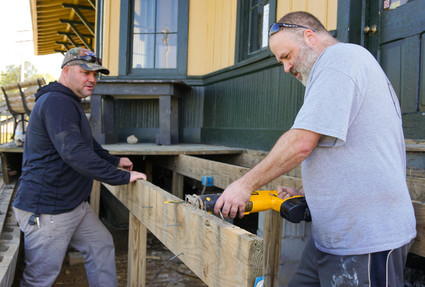 Damien Clayton and Evan Lawson working on rebuilding the porch.

The Lewis County Historical Society began rebuilding the porch of the old train depot following an accident that happened on Saturday, April 4.

According to Barbara Hinson, Lewis County Historical Society's spokesperson, the repairs have cost around $2,500. Insurance has reportedly paid for the majority of the cost.

"The Depot is important to preserve because it's been here from, almost, the beginning of Hohenwald up until now," said Hinson, "It's a part of us."

The Depot was one of the first buildings to be built in Hohenwald, welcoming new settlers. It has seen visits from Thomas Ediso...