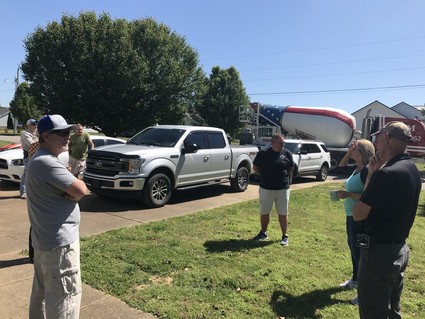 Neighbors began to gather in the yard of Lori McKinney Friday morning after Vice Mayor Barber arrived with Mayor McKnight, left, Codes Enforcer Brad Rasbury. McKinney, second from right, expressed her frustration that yet another house was approved to be built on Edge Street, which she explained means she will, again, have mud, excess water and silt collect in her driveway. A concrete truck passed on its way to the building site while the group discussed the drainage issues in the Edgefield Subdivision. "We want you to stop that construction," Tammy Morey told City officials.

Phone calls that went unreturned Thursday by the mayor at City Hall pushed an Edgefield property owner to call out the City in a Facebook post.

By Friday morning, the mayor, vice mayor and codes inspector were in her sister's driveway to hear their grievances.

For 20 years, Lori McKinney has periodically attended City Council meetings requesting help with street drainage along Edge Street. A subdivision, constructed in phases prior to City Codes, left homeowners with flooded yards and streets due to inadequate drains along the curbs.

McKinney's house sits at the lowest point in the subdiv...