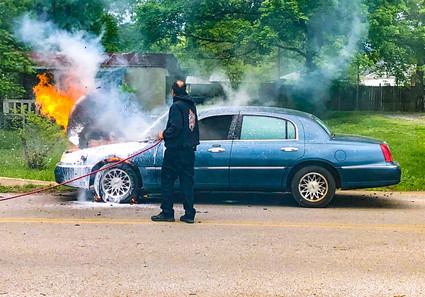 Fire Chief Steve Vineyard arrived in minutes and immediately worked to put out the flames.

First responders were called out on Wednesday, May 6, due to a report of a car near Hometown Bakery had caught on fire.

Firefighters and officers from Hohenwald Police Dept. arrived in minutes to put out the flames and assess the damage.

The car belonged to Lloyd Pratt of Hohenwald. He was driving west along West Linden Avenue when a good samaritan stopped and told Pratt that his car appeared to be on fire, Pratt said.

Pratt was then able to able to call his daughter to come pick him up, and the vehicle was towed to his residence.