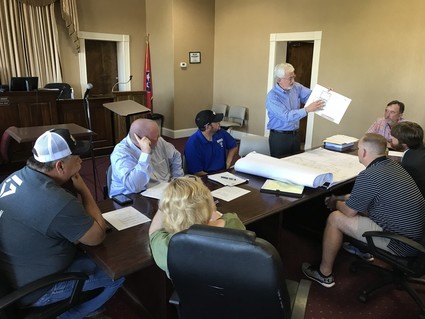 Architect Bill Allen shows what he called the "Brewer Plan" as a basis for the final drawings presented by TLM Associates as TLM President Randy McKinnon, seated right, listens. Members of the Public Safety Committee were faced with reality that an additional $124,000 in design fees are to be paid as Lewis County proceeds with a plan to renovate and do new construction at Lewis County Jail. Seated, left, in the Lewis County Courtroom are Lewis County Commissioner Jerry Ashmore, Mayor Jonah Keltner, Lewis County Commissioners Connie Sharp, T. J. Hinson and Jason Fite. Also pictured, Lewis County Attorney Jack Heath.

Architect Bill Allen presented a set of drawings, 95 percent completed, to the Public Safety Committee Monday evening and also addressed an invoice Lewis County Government protested in the amount of $114,147.

According to Lewis County Mayor Jonah Keltner, Lewis County contracted with TLM Associates in 2012 under then Mayor Van Ward to create a plan for a new jail. At the time, estimates came in at $7 million for a new penal facility.

Three mayors and three commissions later, Lewis County has paid, to date, $250,003.87 in design fees. Before the plan is completed, another $9,400 is expected, bringing the latest total to an approximate $124,000 in additional fees.

Design changes and modifications requested by each commission were blamed as the culprits for excessive fees.

Mr. Allen told the committee if they pursue a USDA Rural Development loan, the project would likely be delayed several months in Federal Government bureaucracy. Additional fees would be charged to comply with sometimes daily inspection requirements of a USDA loan. To avoid daily inspection fees and further delays in letting of bids, Allen suggested the county could pursue other sources of loans for the projected $4.7 million facility.

The current plan is one suggested by Lewis County Commissioners Robert and Ronnie Brewer that would cost less and still resolve the problems of overcrowding.

Members of the committee voted unanimously to find other sources of financing in order to expedite the process toward construction. And to avoid extra costs from TLM Associates for inspections.

Fees amounting to $125,000 will take Lewis County through the bidding process which could begin in 45-60 days, since the county decided to forego the USDA loan process.

Mayor Keltner, in a phone interview Tuesday, said the county attorney advised the committee not to continue to contest the latest invoice. Attorney Jack Heath reportedly told the mayor the county could possibly win a case against the architect, but the cost of the legal fees could possibly negate the potential savings.

A new contract will be prepared by Mr. Heath on behalf of Lewis County for the remainder of the work done by TLM Associates, the mayor added.

TLM Associates is expected to present the plans to the construction manager, Greer Lashlee of Lashlee-Rich in Humboldt soon. Lashlee, through the bid process, will assist in obtaining a guaranteed maximum price (GMP). With the GMP, Lewis County will have a better understanding of construction costs for renovations and new construction at Lewis County Jail. The GMP will be used as a basis for financial planning for the jail construction.