Committee has Another Plan for Solid Waste Fees 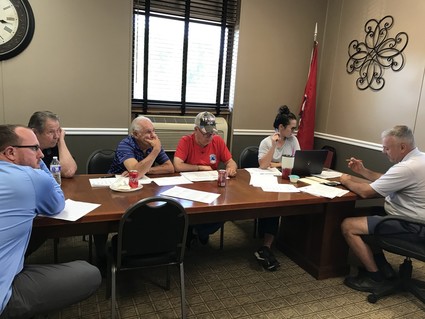 Left, Lewis County Commissioners Aren Ragsdale, Jim Grinder, Larry Hensley, Bill Dyer, Allison Tanner and Wendell Kelley met as the Lewis County Solid Waste Committee went through the Solid Waste budget for the upcoming fiscal year to determine where and how much could be cut in expenses.

The most serious is the pending shortfall unless changes in revenue are approved.

As of Monday morning, the Solid Waste fund had $110,890, "the lowest it has ever been at this point of the year," the mayor stated, in warning of a potential negative balance looming in coming months.

"And for the seventh consecutive month, I'm warning commissioners again that this fund will soon have a NEGATIVE Fund Balance if you all don't act immediately to bring in additional revenue to cover the huge cost our county incurred to dispose of our household garbage due to the Decatur Co. Landfill closure," he wrote in a note handed to those in attendance.

Staff of the Solid Waste Department made the following adjustments, reported by the mayor.

Aggressive pursuit of delinquent solid waste fee collection which has resulted in a reduction from $113,000 two months ago to a new total of $62,178 delinquent.

A management change at the Transfer Station was done to restructure current policies and procedure, to change the culture and to implement constructive changes, the mayor wrote.

Recycling has been promoted and encouraged with the community responding positively. New signage at the Transfer Station, videos for Facebook and articles published in the newspaper have promoted recycling, Mayor Keltner wrote. Recycling containers have also been installed at the courthouse.

Pit material has been kept from the garbage trailers to limit the amount of weight hauled away and paid for by Lewis County.

Dislocated and youth workers, as well as inmate labor, have been utilized and employee hours have been reduced when possible.

Other Transfer Stations have been visited to glean ideas, directly contacting businesses about recycling cardboard has helped and a careful study of long term solutions to the problem are being studied.

Cuts by the Solid Waste Committee will be proposed to the full commission Monday, June 15, 2020. Residential fees may increase to $100 per year with a small commercial rate increase. The committee also identified a list of businesses that are currently not paying commercial rates.

Who Has The Solution? 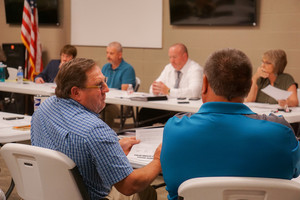 In yet another Solid Waste focused meeting, the Lewis County Board of Commissioners continued to seek an alternative to increased fees to save the beleaguered Solid Waste Department.

"This is the fifth month in a row that the County Commission has..."