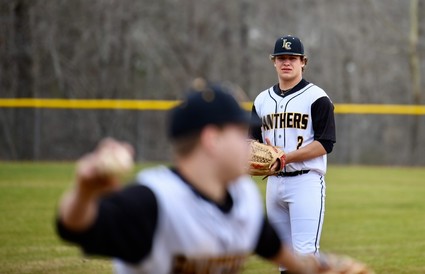 Just as the spring seasons were starting for the Lewis County High School softball, baseball, and tennis teams it ended abruptly with no indication as to when or if they would be able to continue their season with concerns of the COVID-19 pandemic. As the days and weeks wore on, it became clear that not only would there be no spring sports, but the remainder of the 2019-2020 school year was cancelled as well. The teams, and, in particular, the group of Seniors, would be left with the burning question of "what could have been?" Without the opportunity for one final at bat, one final match, one last opportunity for postseason play, the Senior athletes of 2020 will live with the memory of a Senior season that came to an abrupt and disappointing end. Without the final home game and match that would, under normal circumstances, have provided coaches the opportunity to recognize graduating Senior team members, coaches were contacted to recognize this group in this week's edition of the Lewis County Herald.

The Lewis County Lady Panther Softball team started the season with two wins before the season came to an end. Head Coach Greg Amacher said he had never seen anything so bizarre. "With four Seniors, including my youngest daughter Liza Beth, it has also been the saddest season I've ever had and so hard because it was something I couldn't control. This group of Seniors had the best attitude and were working hard and making everyone else work harder because of the examples they set each and everyday at workouts and practices. We got to play 2 games and in both we had excitement and camaraderie among them and their teammates that was fun to be a part of." He said of his Seniors, "they were unselfish and just wanted to win and do whatever was asked of them to get the job done, and it showed with the 2-0 start to the season." Amacher concluded that "the 4 Seniors will always hold a special place in my heart and will be the only undefeated softball team ever at LCHS. Without a doubt, I think these girls will go out and accomplish great things in life." Coach Amacher recognized each Senior individually in comment.

#7 Liza Beth Amacher. Liza played second base for the Lady Panthers and batted second in the lineup. "Liza loves softball and always gave 100%, she loves to win and hates to lose as much as anyone I know. I was looking forward to her Senior year and it was making me more excited to coachhard and work harder than I had been in a few years," Amacher said. "Her excitement and chicken crowing would fire up the dugout and would always help to create a spark."

#22 Hailey Bowen. Hailey played shortstop and centerfield for the Lady Panthers. A slapper with tons of speed, Coach Amacher recognized Bowen for her consistent effort. "Hailey always gave me everything she had when the game was being played, and was willing to play anywhere on the field and hit anywhere in the lineup." Amacher continued with "Hailey never complained about what was asked of her, and just wanted what was best for the team."

#5 Abagayle Brock. Abagayle played catcher for the Lady Panthers and was at the top of the batting order. "Abagayle had the work ethic to push herself and everyone around her," said Amacher, who viewed Brock as one of his own daughters. "I depended on her to make sure things got done and coordinated every day. She worked with others to make them better and always had the best attitude, smiling and laughing," as he commented on her leadership on the team.

#18 Allison Jackson. Allison played third base for the Lady Panthers and was the number 5 hitter. "Allison was one player that I could aggravate and kid with as much as any player I have ever coached," Amacher explained. "Coming into the season Allison was working harder than ever before, and was willing to extra and work hard to help herself and others to get better. She wanted us to have a great 2020 season."

The Lewis County Panther Baseball team started the season with two wins before the COVID-19 pandemic brought on the cancellation of the season. Head Coach Tim Tiller expressed his disappointment. "It stinks because I could see the team getting better and better, players beginning to show confidence, playing with grit," Tiller said. "This was a situation that was beyond our control, but what was in our control was how we responded." Tiller wanted his team, especially those that would return, to see the opportunity to "work, practice, and play every practice or game like it would be their last." Tiller explained that "staying strong physically, mentally, and spiritually will only prepare us for what is next." When talking about his group of Seniors, Tiller added that he hoped they would "stay motivated to do the right things, things they had been taught in order to be successful, and remember that athletes are a special kind of different people." Tiller commented on each of his Seniors, and said that he "couldn't express enough what all these guys mean to him, they will always be a part of my family, I will miss the Seniors and Coach Holbrook and I love each of them."

#12 Zac Benson played catcher for the Panthers. "In my mind ac Benson was headed toward a record year after hitting 5 homeruns his Junior year and dedicating himself to offseason work with Coach Holbrook and myself," said Tiller. "I knew his hard work and determination was going to pay off big for him in his Senior season."

#3 Ethan Lindsey played third base for the Panthers. "As a Junior, Ethan Lindsey had an outstanding year defensively," Tiler commented. "Like Benson, Lindsey put in countless hours of extra work to improve every aspect of his game."

#9 Huntlee Pace was a pitcher for the Panthers. "We were all greatly anticipating Huntlee Pace's Senior season, but no one more than Huntlee," said Tiller. "Huntlee missed his Freshman and Sophomore seasons due to injuries, and was working hard to get ready." Tiller continued that "Huntlee had a nasty knuckleball, and had picked up a preseason win and a regular season win before the season came to an end."

Scott Mullinicks, the "Voice of the Panthers", was the public address announcer for Panther Baseball. Scott served this team with "excitement and enthusiasm" during his four years at LCHS. Tiller recognized the important role that Mullinicks had for the program, that he "added something for both players and fans at all home games."

Braxton Best, manager for the Panthers. Braxton was only with the team a couple of years, but was an "important piece in the dugout, with a great attitude and work ethic," Tiller said. "The cancellation of the season affected all the Seniors and took what should have been a great experience away from each of them."

The Lewis County Panther Tennis teams were able to play in three matches before COVID-19 brought an end to the season. Coach Shelby Tanner had seen hard work and improvement through the first couple of weeks of the season and was excited to see the season unfold. Through the first three matches, the girls team had a 7-8 record in singles matches and a 2-2 record in doubles matches. The boys had a 9-5 record in singles and a 3-1 record in doubles. "I really do hate that we didn't get to finish this season," said Coach Tanner, "we wanted to defend our District Championship title." Coach Tanner commented on each of her Senior tennis players.

Abbie Brewer was the lone Senior on the girl's team. "Abbie was my spitfire," said Coach Tanner. "She brought so much joy to the team. She could hang with the girls and the boys on the court." On leadership, Tanner continued that "Abbie was a real leader among the girls on the team and she stepped up so much during her Senior year."

Caleb Carroll. Coach Tanner said "Caleb is just an exceptional young man. He was the first seed and captain of the boy's team since his Sophomore year." Caleb was an important piece to the team his Junior season, "he stepped up and led the team to a District Championship last year, and had an ability to help others improve their game, which was admirable," Tanner continued. A "huge asset to the team, Caleb was the LCHS Tennis team MVP."

Blant Mayes. "Blant is one of the hardest working players I've seen," Coach Tanner said. "His dedication to the sport is admirable. He gave his all every time he stepped up to the courts." On his role with the team, Tanner noted that "Blant is the hype man of our team, always ready to play tennis and encourage his teammates."

Cole Bates. "You can never count Cole out! I learned that very quickly his Junior year," Tanner exclaimed. "He never gives up no matter if he is losing, which didn't happen often. Cole is one of the anchors of our team. I could count on him when we are in tight spots to pull off a win," Tanner concluded. 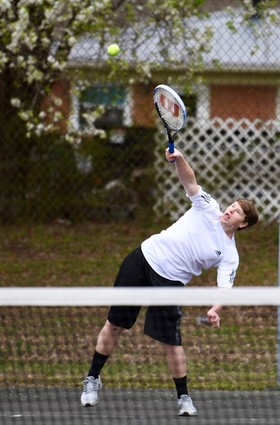 Grant Pasold. "Grant would be our class clown of the team," Tanner said of Pasold's personality. "He always keeps everyone laughing and on their toes. He treats every opponent with respect and makes them laugh the whole game."

Cade Banks. "Cade had improved so much from Sophomore to Senior year. He is a very athletic, smart, dedicated player," said Tanner. "Cade is fair and respectful to every person that he played," she continued, adding that "Cade is one of the most level-headed players on the team. I can always count on him to tell me the truth about good calls and bad calls."

Tyson Spears. "Tyson had worked so hard from the beginning of his high school tennis career to the end," Coach Tanner pointed out. "I would say that Tyson is the most improved player of our team. Every practice, I could always see improvements."