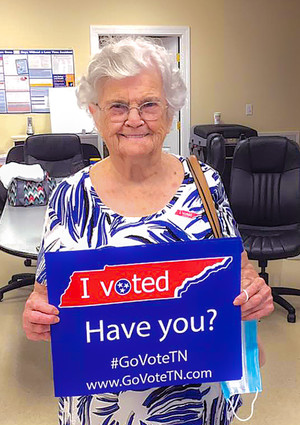 Decatur County Election office posted a photo of this 100 year-old lady, Mildred Stephens, mother of Phyllis Townsend, who exercised her right to vote in the early election.

Lewis Countians planning to vote early in the State and Federal Primary and County General Election only have until noon Saturday, August 1. Election Day is Thursday, August 6.

Lewis County Administrator of Elections Rusty Isbell stated as of noon Tuesday, July 28, 1009 voters had taken advantage of the early voting period. In 2016, the total voters in both early and polling places was only 726.

Lewis Countians are encouraged to do their part during early...