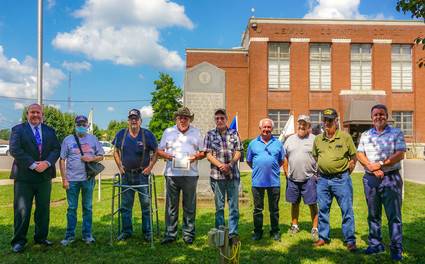 "For those who fought for it, freedom has a meaning that the protected will never know," quoted Purple Heart Veteran, Jack Cothran, after thanking those who came out to the courthouse, officially recognizing August 7th as Purple Heart Day in Lewis County.

"I appreciate you all coming out here... My heart goes out to the men and women fighting for this country today," said Cothran.

The Purple Heart is a military decoration awarded to soldiers who were wounded or killed while serving in the Armed Forces since 1917.

Its meaning and purpose, however, have changed significantly over time to honor those who bravely fought for their fellow man during various wars.

The Purple Heart was originally created in 1782 by none other than President George Washington, making it the oldest military decoration that is still awarded today. At that time, it was called the Badge of Military Merit. It was only awarded to three men before it fell into disuse and was forgotten.

Nearly 150 years later, in an effort led by General Douglas MacArthur as Army Chief of Staff, the Army announced in General Orders No. 3, 1932, that "the Purple Heart established by George Washington in 1782" would be awarded to a soldier in the Army who performed "any singularly meritorious act of extraordinary fidelity or essential service," especially if the individual was wounded while performing such an act.

It was not until U.S. involvement in World War II that those who were killed in action could receive the decoration. In the words of General MacArthur, the award was "not intended to commemorate the dead, but to animate and inspire the living." The award was also limited to only Army soldiers until 1942, when the authority was given to award any soldier of any branch with the decoration.

Cothran, Sharp, Crist, Morris, Keel, and Runions, along with many other men, would never have been awarded with the Purple Heart if it were not for John F. Kennedy's executive order in 1962.

Because the U.S. had not officially declared itself a formal participant in the Vietnam War, and were legally classified as serving in an "advisory capacity," our soldiers did not meet the strict criteria for the Purple Heart. President Kennedy changed the wording to include soldiers wounded or killed "while serving with friendly foreign forces," or those killed or wounded "as a result of action by a hostile foreign force."

In February 1984, President Ronald Reagan signed Executive Order 12464, which declared that those wounded or killed as a result of an international terrorist attack, or while serving "as part of a peacekeeping mission," be included.

The wars in Afghanistan and Iraq brought about the inclusion of those who received brain injuries caused by improvised explosive devices (IEDs). Brain injuries are not to be confused with PTSD, as it was not a "wound intentionally caused by the enemy... but a secondary effect caused by witnessing or experiencing a traumatic event," the Defense Department stated.

Since the Purple Heart's existence, an estimated 1.8 million men and women have received the decoration. However, the exact number is not tracked or recorded by the Pentagon which leaves this up to local community leaders.

The men who are known to have received a Purple Heart in Lewis County, as of 2012, are as follows: Gerald Bobo, Robert Cothran, Harry Crist, Randy Duncan, Marvin Hand, Thomas Iverson, Ronnie James, Robert Keel, Rodger McDonald, Robert McKnight, James Morris, Christopher Odom, Bill Richardson, Dwayne Runions, James Runions, Jerry Sharp, Ralph Suttles, and Larry Wright. Some of these veterans have since passed, but they are no less honored and remembered.

If you or someone you know have not been included in this list, and are from or living in Lewis County, contact Richie Brewer or Judy Runions at the War Memorial Building.

To purchase an engraved brick to be displayed at the War Memorial Building in honor of a veteran, contact Jack Cothran. All proceeds go to Lewis County Veterans of Foreign Wars. 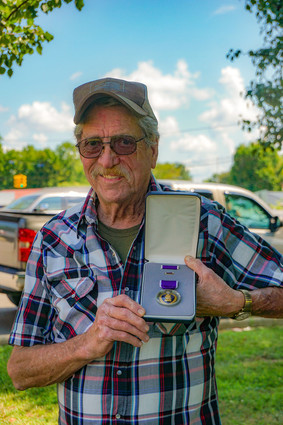