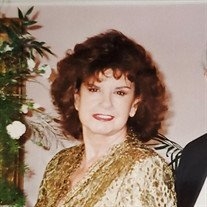 Martha Elizabeth Vaughan, age 94 of Hohenwald, passed away unexpectedly on Friday, August 7, 2020 while visiting with family in Bremen, Georgia.

Mrs. Vaughan was born on June 19, 1926 in the small town of Big Rock in West Tennessee to the late Joe Rufus Ellis and Martha Ella (Duncan) Ellis, but, according to family, she never enjoyed the country life.

From early childhood she always wanted to be dollied up. She grew up on a farm with eight brothers and sisters. One of her favorite memories of her father was when he brought her a present of red lipstick back from town.

Martha and her childhood sweetheart, Plummer, married after his service in the Army in the 1940s. They traveled to Detroit, Michigan for work, and lived there where Plummer was employed in the concrete business for 10 years.

They moved to Parsons in 1959, then to Hohenwald nine months later after being awarded the Lewis Product Plant concrete job.

The first years in Tennessee were an adjustment for Martha, until she joined Plummer working in the office of V & W. She enjoyed serving customers and she gradually began to adapt to country life. For the next forty-five years, Martha worked in the business with Plummer until his passing in 2009. She continued to be President and Owner of the V & W Ready Mix Concrete Corporation for four more years, until the business was sold in 2013.

In addition to her parents and husband, she was preceded in death by a granddaughter, Heidi Schwendimann Cothran; and eight brothers and sisters.

Service was conducted at 1:30 p.m. Wednesday, August 12, 2020 at the Lomax Church of Christ with Jeff Spears and Garth Richardson officiating. Russell Cothran was in charge of the music. Entombment followed in the Swiss Cemetery Mausoleum.