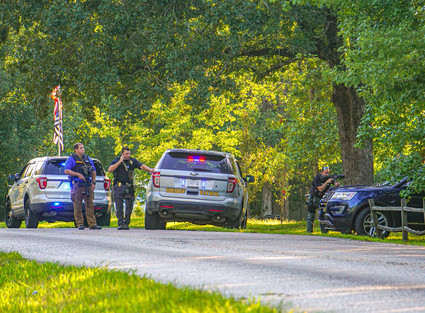 Assistant Chief of Police Kevin Carroll and Chief of Police Kip Kelsey were among law enforcement officers who assisted in a call Monday afternoon when a man threatened to kill himself and anyone who attempted to intervene. Members of the Lewis County Sheriff's Department, the Hickman County SWAT team and other local emergency officials responded to the call.

A 46-year-old disturbed Lewis County man barricaded himself in his home on the evening of Monday, August 17, 2020.

A call came through E911 dispatch around 5 p.m. from a mental health center that they were on a phone line with a patient who stated he wanted to die. While on the phone, the patient mentioned suicide by cop.

According to Lewis County Sheriff Department Captain Matt Tiller, when he arrived at the home on Rockhouse Road, family members came out shouting the man was armed and going to kill himself.