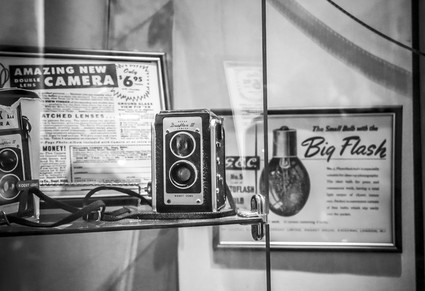 A Kodak Duaflex III was one of the many cameras owned by Clyde and Opal Hinson. They were in production from 1947 until 1950 in the United States. The Kodak Duaflex line was one of the first that effectively prevented double exposure, or turning two photographs into one.

Clyde and Opal Hinson (whose maiden name was McClarean) made their living shooting photography at their home on Cedar Street here in Hohenwald during the World War II era.

The Hinsons were mainly interested in portrait photography, shooting for families, individuals, and even soldiers who went off to war.

"Once we got involved in World War II, a lot of families wanted pictures of their soldiers before they went off to war, so families would bring their sons over to Mom and Dad to have their pictures made," said Ken Hinson, son of Opal and Clyde.