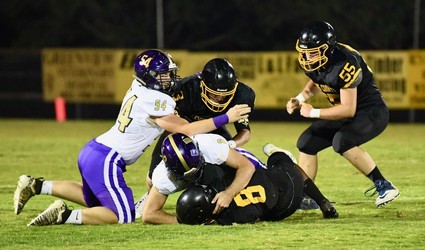 After the Vikings opening possession netted negative yards, Lewis County's Blake Carroll dropped back to return the Community punt and electrified the Homecoming crowd, fielding the punt and taking it 47 yards to the house to give the Panthers the early lead. Carroll added the point and with almost ten minutes remaining in the first quarter the Panthers led 7-0.

The Panther defense remained stingy for the remainder of the first quarter as the Vikings had 13 plays for only 8 yards and the score stood at 7-0 at the end of the first quarter. The Panthers wasted little time getting to the end zone in the second quarter, as Ethan McCann scored from 21 yards out only 21 seconds into the second, and with the Blake Carroll PAT the Panthers extended the lead to 14-0.

The Panthers would go on to score four more times in a fast-paced second quarter. Quarterback Bryson James connected with Ethan Fransen for a 35-yard touchdown pass. Sloan Moseley intercepted a Viking pass and streaked to the endzone for a pick-six. Blake Carroll added a 29-yard touchdown run, and, with seconds remaining in the half, Bryson James found Robert Young for a 46-yard touchdown pass. Adding 28 points in six and a half minutes of play, the Panthers extended the lead at the half to 42-0.

The Panthers had the first possession of the second half and proceeded to march down the field on a 3-minute drive that was capped off by a 24-yard Austin Hicks touchdown run to give the Panthers a 48-0 lead.

The Vikings would break the goose-egg late in the third quarter with a running clock on a 6-yard run by C.J. Rivera, but the two-point conversion failed, and the Panthers were up 48-6.

Mid-way through the fourth quarter the Panthers would add one last score, as Austin Hicks scored his second touchdown on the ground, this time a 36-yard sprint. Ethan McCann added the PAT and the Panthers lead grew to 55-6, where it would remain through the end of regulation. The win took the Panther record to 3-0 and opened Region 5AA play 1-0. 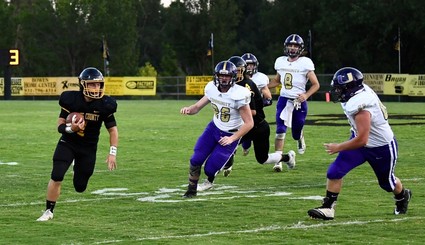 Quarterback Bryson James completed 2 of his 3 passes on the night for 81 yards and 2 touchdowns, 35 yards to Ethan Fransen and 46 yards to Robert Young.

The Panthers will be back in action on Friday night, September 11th, as they travel to East Robertson.