Human trafficking victims and how to protect them 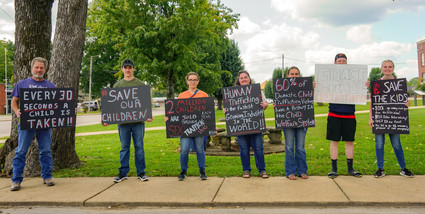 The child trafficking awareness demonstration took place in Hohenwald Sunday, Sept. 20th, on the corner of the Courthouse. Some of the demonstrators are pictured above with their signs. Several people passed, honking their horns in support and waving.

Every adult, 18 and older, is a mandated reporter in Tennessee for child abuse. That means each of us is legally required to report a suspicious situation when we see it.

An increase in reports leads to an increase in children found. But in order to make those reports, we first have to understand who the victims are and what signs we need to look out for.

Eighty-four percent of sex trafficking survivors had a history of child sexual abuse.

The median age for child sexual abuse is 9 years old.

The definition of human trafficking was defined by Polaris as "the use of force, fraud or coercion to get another person to provide labor or commercial sex."

This means that human trafficking is not only happening in underground or illegal industries. It can happen in restaurants, construction, cleaning services, etc.

Human trafficking has not only targeted females. One study estimated that as many as half of all sex trafficking victims were male.

The average age of kids that are trafficked out of the home is 13 for girls and 10 for boys. Director of Marketing and Community Outreach for Davis House, Tara Tidwell, explained, "Men want girls who look like women and boys who look like boys... That doesn't mean girls 9-11 and boys older than 10 aren't involved. They are. It's only the average."

It was estimated that fifty to ninety percent of trafficking victims were involved in the child welfare system before or when trafficking began, according to childwelfare.gov.

Children who feel isolated are more vulnerable to being trafficked. One of the biggest groups targeted for trafficking are children who are homeless or who have run away.

The National Center for Missing and Exploited Children, or NCMEC, said that there were approximately 23,000 known runaways last year. Of those kids, one in six were trafficking victims. These responses only came from children who were willing to admit they were living in that enviornment.

"Sometimes these kids will say that they were living in an abusive household, maybe they were in the foster care system. So they run away and leave," said Tidwell. "That's a really high risk group... They're desperate and they need money. They need someone to care for them."

Fifty-two percent of all the juveniles that have been trafficked and arrested were African-American.

Children in the LGBTQ+ community are at high risk of trafficking. "Children who are ostracized from their families or from society... end up leaving the home or going out in search of someone that will care for them, and traffickers can latch onto that in a heartbeat," said Tidwell.

Another way children have been targeted in recent years is online. Seventy-six percent of sexual transactions for underage girls began online, which can lead to sextortion. Sextortion is sexual exploitation using abuse of power, such as threatening to release sexual images or images to coerce the victim.

"The TBI Director, David Rausch, said that there had been an increase in predatory activity online.. and has increased their surveillance," said Governor Lee in a phone conference with the press. "[As for the community], parents beware, teachers beware and send in tips to the TBI."

Signs to look out for:

If there is a child that you know and see regularly, you can look for changes. This could mean changes in behavior, such as an outgoing child becoming withdrawn and quiet; or maybe you see a child carrying around expensive things like a brand new iPhone or wearing designer brands, and you know he or she does not have the financial means to obtain those things.

"That's one of the ways traffickers will reward the kids - by buying them things; just giving them enough to keep them going. Especially if they're being trafficked out of their own home," Tidwell said.

Look for branding. Traffickers will often tattoo the children, letting other offenders know that the child is already taken and belongs to a certain group. Some of these tattoos can literally be barcodes or numbers.

Another sign is if you talk to the child and they seem very scripted, will not talk about themselves or let an adult talk for them.

"We had a case where one woman called something in because she had gone into a gas station and had seen three young girls waiting outside the bathroom. She was just talking to them, asking questions and all three of them gave the exact same answers to questions. That seemed odd to her, so she called it in and it turned out that those three girls were actually being trafficked by the same pimp, locally," said Tidwell.

If you think you have witnessed something suspicious, the best thing to do is report it. "Most people don't realize that, in the state of Tennessee, all adults are mandated reporters," Tidwell said. "Not just teachers, not just law enforcement, not just Department of Children's Services. Every. Single. Adult."

If you think the child is in immediate danger, you can call 911 but if not, your local law enforcement and dispatch will know how to handle the situation. You can also contact organizations like the Tennessee Child Abuse Hotline, whose number is 877-237-0004, and NCMEC whose number is 1-800-THE-LOST.