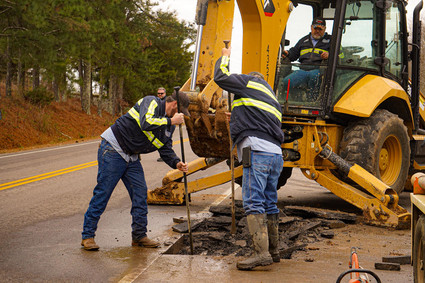 City workers busted up pavement on Monday, December 28 to repair a broken water pipe on West Main Street, in front of 412 Building Supply.

Employee Kenneth Hicks said the breakage was likely caused by the pipe's old age. "Once you get down to [the pipe], the repair doesn't take long. It's just getting to it," said Hicks when asked how long he believed the repair would take.

Hicks and two other workers continued to bust up the asphalt, and remove the pieces chunk by chunk using post-hole digging bars, a skill saw and a backhoe.