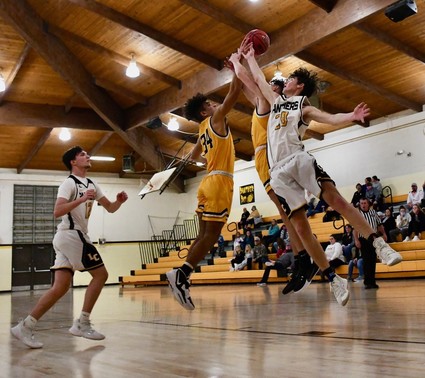 The Lewis County High School Lady Panthers and Panthers played at home on December 7, 2020 when they hosted the Lady Wildcats and Wildcats of Wayne County.

In the girls' matchup, it was the visitors who took control early in the first quarter as they were able to pull away to an early 22-9 lead at the end of the first. The Lady Panthers struggled to put together an offensive run against the Lady Wildcat defense, limited to 6 points in the quarter, 3 each from Jayden Hinson and Serenity Warman, and fell behind 42-15 heading into the half.

In the boys' game, it was a back-and-forth battle from the opening tip as the Panthers used 6 points from Levi Thompson to keep pace with the Wildcats and take a 16-15 lead at the end of the first quarter. Bryson Clayburn had 4 in a second quarter that saw the Panthers open up to a 35-28 halftime lead.

Lewis County continued to put space between the visitors, outscoring the Wildcats 18-16 in the third and taking a 53-44 lead into the final period of regulation. The Wildcats battled back in the final frame, but the Panthers were able to hold them off and take the win 67-63.

Levi Thompson led the Panthers with 18, Rhett Middleton had 12, Bryson Clayburn, Dyer Barnes, and Slade Moseley each had 9, Braden Powers 8, and Austin Shepherd 2.

The Wildcats got 23 from Clay Baugus and 21 from Tyler Moser, Austin Whitson had 8, Landyn Prater 6, and Ethan Camfield 5.

The Lewis County High School Lady Panthers and Panthers travelled to Centerville on December 8to take on the Hickman County Lady Bulldogs and Bulldogs.

Lady Bulldogs of Hickman County opened up an early lead 13-6, limiting the Lady Panthers to 2 Jayden Hinson three-point baskets. In the second quarter, the Lady Bulldog defense turned up the heat and pulled away to a 38-16 halftime lead.

Serenity Warman had 8 for the Lady Panthers on the night, Jayden Hinson and Kerrigan Reeves each added 6, Keira Halbrooks 5, and Blayr Clayton 2.

The boys game was billed to be a tight matchup and it did not disappoint. From the tip the two teams matched each other almost basket for basket and in intensity. It was the host Bulldogs that took an early 19-17 lead after eight minutes, as Levi Thompson dropped 9 first quarter points for the Panthers. The Panthers mounted a strong run in a defensive second quarter, limiting the Bulldogs to 8 points and taking a one-point 28-27 lead at the half.

The Bulldogs came out of the locker room and seized momentum early, reclaiming the lead despite an 8-point effort in the quarter from Dyer Barnes for the Panthers, and Hickman County held a 46-42 lead moving into the final eight minutes of regulation. In a high-scoring fourth quarter, highlighted by 10 Bryson Clayburn points, the Panthers managed to seek out a 67-66 district win.

The Lewis County High School Lady Panthers and Panthers hosted the Waverly Lady Tigers and Tigers for a District 11AA tilt on December 11, 2020.

The girls' matchup was the first of the evening, and the visitors from Waverly took a lead in the early part of the first period and held a 14-6 advantage moving on to the second quarter. The Lady Panthers began closing the gap in the second as four different players scored and the defense began to turn the momentum and the Lady Panthers cut the Lady Tiger lead to 19-15 at the half.

The Lady Panthers continued to trim the lead held by the Lady Tigers in the third quarter, outscoring the visitors 9-7 to trail 26-24 as the game moved into the final eight minutes of regulation. The teams exchanged stops and baskets in a tight final quarter of play as the Lady Panthers came up short as time expired, falling 37-34.

It was the Tigers that dictated the pace of the boys' game early, taking the lead and pulling out to a 17-12 lead as time expired in the first quarter. The Panthers fought back in the second behind 7 points from Bryson Clayburn, pulling even with the Tigers at 30 as the teams went to the locker room at the half.

The Lady Hawks continued their onslaught in the third quarter as they outscored the Lady Panthers 24-7 as Lewis County got 5 of their 7 from Kerrigan Reeves and trailed 62-26. With a running clock in the final period of play, Lewis County held the visitors to 1 while dropping 6 but fell well short in the 63-32 final.

The Panthers took the floor looking to get back in the win column following an overtime loss earlier in the week at Fairview, and wasted little time jumping out to a lead. Five Panthers found the basket in the first 8 minutes of play and the Panthers took a 21-5 lead after the first quarter. The Panther offense was clicking again in the second and got points from 8 players in a 28-point outpouring as they ran out to a 49-18 halftime lead.

The Panthers did not let up after the intermission, again finding scoring from several players as they took a 76-33 lead into the final quarter of play. With a running clock in the final eight minutes of play, the two teams played virtually even and the Panthers took an 83-39 victory at home.

The Lewis County High School Lady Panthers and Panthers basketball teams travelled to Stewart County on December 19 to take on the Stewart County Rebels and Lady Rebels in a District 11AA matchup.

It was the Lady Rebels who jumped out in front early in the first quarter, outscoring the Lady Panthers 21-7 in the first 8 minutes of action. The Lady Panthers struggled to find stops on defense and find the basket on offense in a lopsided second quarter of play as the host held a 38-12 lead at halftime.

Kaitlyn Bramlett had 20 for Stewart County, Adavia Hewell 11, Tori Hale and Rylee Gafford 8 each, Jenna Williams 7, Jennifer Diehl 5, Emma Page and Karlee Bramlett 4 each, and Elizabeth Guynn and Amy Story had 2 each. 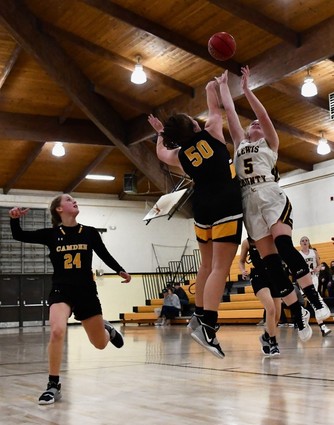 Coming off an offensive outpouring two nights prior, the Panthers were hoping to keep the hot hand in the 11AA matchup with the Rebels on the road, and the teams matched baskets for the first 8 minutes of play. The Panthers got 8 first quarter points from Bryson Clayburn and trailed 18-17. The Panthers struggled through most of the second quarter, limited to 3 points from Slade Moseley and 2 from Braden Powers, and the Rebels pulled out to a 31-22 lead at the half.

The Panthers stormed back after the half, as Moseley dropped 8 in the period and the Panthers outscored the host 16-4 to take a 38-35 lead into the final period of regulation. The Rebels bounced back in the fourth, clawing back even at 47 to send the game into overtime. The teams played even in the overtime before Stewart County was able to take a 2-point lead and send Lewis County home with a 53-51 loss.

Landon Dennis had 15 for the Rebels, Will Page 13, Weston Wallace 11, Aden Houston 7, Eli Bogard and Sawyer Wallace 3 each, and Gavin Smith 1.