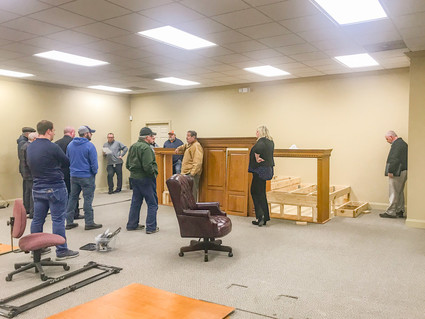 During last Monday's County Committee meeting, the Budget Committee was presented with two big ideas from Industrial Development Board member Rob Inman and a company spokesman for energy-saving light bulbs.

Inman came before the committee asking them to consider approving the Industrial Development Board to develop a pilot for possible businesses looking to lay their roots down in Hohenwald.

A pilot is a financial template that can be used to cut the time in half that it typically takes for a business to be approved to come to Hohenwald.

The committee members all agreed that it was a good idea that should go before the full county commission. Inman will present a more detailed account at the next County Commission meeting on Monday, February 15.

The Associate Vice President for the company Future Energy Solutions (FES), Brad Schwartzman, came before the committee to pitch the value of replacing the Courthouse's lights with energy efficient light bulbs produced by his company.

Schwartzman estimated that there would be 134 interior and exterior fixtures replaced with their low-wattage LED light bulbs at no cost to the county government.

"We would fund the costs in exchange for 75% of net energy savings for 15 years," said Schwartzman.

He also calculated the current cost the county pays to maintain their current lights which was $4,654. With FES, the county would pay $3,805 which means there would be an annual savings of $849. This would mean that FES would get 75% of the $849 that was saved.

The committee decided that the decision should also lie in the hands of the County Commission in full.

Hans Schwendimann, Judicial Assistant for Circuit Court Judge Michael E. Spitzer, brought it before the committee that the judge's bench built for Judge Spitzer in the new Justice Center had been built to the wrong measurements.

The bench is supposed to be eye-level with counsel or 18 inches off the ground. The half-built bench was built to nearly double the size.

Schwendimann said it posed an issue for the county to not have it rebuilt because it would be difficult to get it up to code. The builder said it could cost around $2,000. The committee asked that plans be drawn up and brought before the commission.