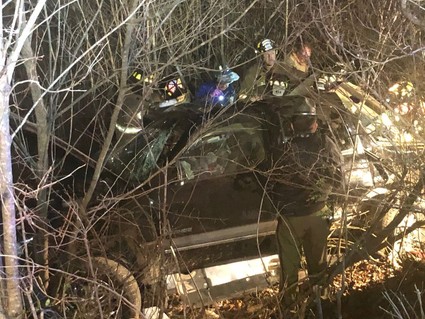 According to Tennessee Highway Patrol Trooper Steve Karpati, Kareena M. Allison, 28, of Smith Street, Hohenwald, was behind the wheel of a Chevrolet Tahoe travelling north on New Kimmins Road. Trooper Karpati stated that Allison was driving 'Too fast for conditions' which resulted in the crash where passenger Christopher N. Barnes, 24, of North Walnut Street, Hohenwald was found dead.

Lewis County Fire and Rescue responded to retrieve the injured Allison and the deceased Barnes from the deep ravine. Allison was taken by Maury Regional Emergency ambulance to the helipad at Lewis Health Center and flown by air ambulance for treatment of critical injuries. She has since been released from the hospital. County Coroner Dr. Lori Stewart and County Medical Examiner Dr. Joey Hensley both were on scene to examine Barnes. 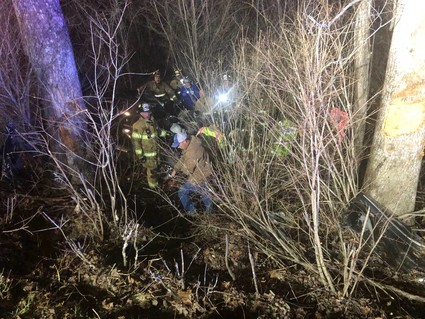 Hohenwald Police Chief Kip Kelsey commented that Officer Halfacre acted in a professional way, was just doing his job, and followed police policy in attempting to make the traffic stop. "All she had to do was stop for the blue lights," said Kelsey. GPS monitoring of Officer Halfacre's vehicle show he was pacing at 33 mph when blue lights were activated. Within the 51 seconds of following the Tahoe, Halfacre had reached a top speed of 58 while keeping the fleeing vehicle in sight, and back to 30 by reaching the crash scene. Allison has outstanding warrants and a suspended license. Trooper Karpati said charges are pending the outcome of the investigation. A CIRT (Critical Incident Response Team) branch of Tennessee Highway Patrol responded to re-create the accident.