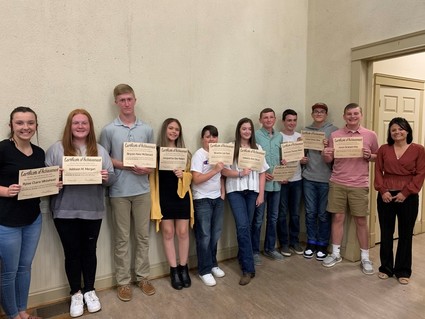 The invocation was given by Mr. Farr. The Pledge of Allegiance was led by Mrs. Himes.

The board recognized the following teachers of the year being selected for their accomplishments:

Deborah Walker was recognized for being selected as the Tennessee District Pilot Club Special Education Teacher of the Year.

The board recognized the following students for their accomplishments:

Upon motion by Mr. Clayton and seconded by Mrs. Himes, the add-on to new business was approved:

Upon motion by Mr. Clayton and seconded by Mr. Farr, the Consent Agenda was approved:

In the Director's report:

Accepted the resignation of Mandie Bass, LCIS Paraprofessional, effective May 3, 2021.

Accepted the resignation of Elizabeth Redmon, LCMS Paraprofessional, effective May 21, 2021.

The US Department of Agriculture has announced that it is extending Universal Free Lunch program through the 2021-2022 school year.

Director Pace asked Sasha Powers to give the latest Covid report. Mrs. Powers informed board members that there were zero positive cases in Lewis County Schools. She stated that the schools are transferring back to some of their normal activities. She further stated that the elementary school has let their students go on a staggered schedule back to the cafeteria for lunches; intermediate school had a field day; middle school has transitioned back to their normal lunch schedule; and the high school has given their students more of a selection of seating. Mrs. Powers informed board members that she was able to apply for another grant that is Covid related that has to do with Covid testing here at the schools. She stated that this grant would allow to add another nurse to the school system but the Covid testing would have to be done on the campuses. She stated that the grant would be structured by the school as to who would be tested. The testing could be done on just staff or staff and students. Mrs. Powers is gathering more information and will inform the board of the progress of this grant. Director Pace informed members that the minimum this grant would pay would be $150 per student and he further stated that there would not be a mandate for testing. Mrs. Dyer asked if this position would be for an RN or LPN. Mrs. Powers stated that they have not gotten that far in the process yet. She reminded everyone that this would be a one-year position since the grant only goes through 2022.

Mr. Pace informed board members that they would be voting under new business for a contract for professional services with Stephen Ward & Associates. He further stated that there has been so much trouble in the past to get people to bid on the jobs that the schools have bid out. The intermediate school window replacement was just one of the examples he gave for the need of professional services contract.

Upon motion by Mr. Farr and seconded by Ms. Couch, the following was approved:

A) Approve contract between Stephen Ward & Associates, Inc., and Lewis County Board of Education for the replacement of the LCIS windows and for future projects that require building consultants.

Upon motion by Mrs. Townsend and seconded by Mr. Cotham, items (b), (c) and (d) were combined for voter approval.

Upon motion by Ms. Couch and Mr. Farr, the following new business was approved.

B) Authorize the Executive Committee to make such expenditures for the 2021-2022 fiscal year as in their opinions may be necessary to further the educational programs. These expenditures shall include, but not be limited to, learning and instructional materials, other expenses for instruction, plant operation costs, supplies for maintenance and operation, expenses for school lunch program, travel expenses, capital outlay transportation expenses, and fixed charges. It is agreed and understood that such expenditures shall be reported at subsequent meetings of the Lewis County Board of Education throughout the 2021-2022 school year.

C) Authorize the Director of Schools to prepare, sign, submit, implement programs, projects, and budgets under the Individuals with Disabilities Education Improvement Act (IDEIA) Part B P.L. 108-446 as amended; Preschool P.L. 99-457-§619 as amended; Tennessee Code Annotated §49-10-302; Workforce Investment Act (WIA; Carl D. Perkins-4Vocational Act P.L. 98-524; LEAPs and other federal, state, and federal legislation for the 2021-2022 school year. Furthermore, the Director of Schools shall be authorized to submit any future amendments, addendums, correspondence, etc., pertaining thereto on behalf of the Lewis County Board of Education. Also, authorize the Director of School to prepare, sign, submit, and implement programs and projects under the ESSA/Elementary Secondary Education Act, (ESEA), P.L. 107-110; Consolidated Application Plan and future. A line-item budget will be presented to board members for approval. In addition, authorize the Director of Schools to have authority to establish the amounts of funds that will be committed or assigned for specific purposes at the end of the 2021-2022 school year.

D) Approve submission to the Department of Education of the Career Technical and Title Plans and/or Reports. 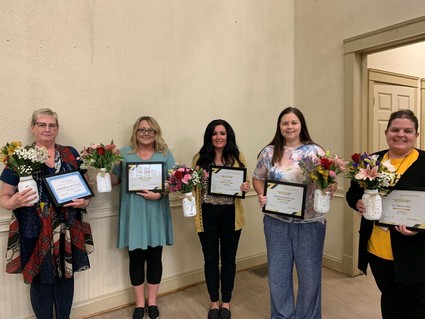 Teachers of the Year

Upon motion by Mr. Clayton, and seconded by Mr. Cotham, the following new business was approved:

Chair Atkinson reminded everyone to keep Joyce Page in their prayers for her upcoming surgery.

Chair Atkinson announced that the next regular scheduled meeting will be June 8, 2021.

Upon motion by Mr. Farr and seconded by Ms. Couch, the meeting adjourned at 6:47 p.m.