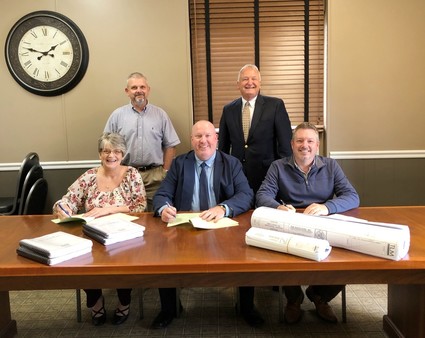 After more than a decade of debating, planning and compromising, construction of the Lewis County Jail Addition/Renovation Project is finally scheduled to start next month, in June of 2021.

In September of 2018, the Lewis County Jail was scheduled to lose its Certification for the first time in its history due to "no measurable progress" regarding years of overcrowding and segregation issues among its inmates.

Decertification not only would have resulted in tens of thousands of dollars in lost revenue for Lewis County Government, but also opened up the County for legitimate lawsuits from inmates that could have cost taxpayers millions of dollars.

Thankfully, during their quarterly meeting on September 5, 2018, the Tennessee Corrections Institute Board of Directors granted leniency on Lewis County due to the August General Election that had resulted in a change of leadership in the County Mayor's office, as well as the fact that one-third of the County Commission was new.

As a result, the Board voted to delay the decertification of the Lewis County Jail a few more months in order to give the new administration time to implement a funding source for the $7 million Jail Addition/Renovation Project that would solve the County's overcrowding problems.

Over the next five months, Commissioners were forced to decide whether the new funding source required by the State would come from a property tax increase or wheel tax increase. Finally, after much research, debate and public input, the Commission decided that the Wheel Tax was the option that was most fair because more people would be pitching in to pay for the Jail that way, as opposed to the estimated 38% of property owners in Lewis County.

As a result, the Board of Commissioners passed a $45 Wheel Tax increase in February of 2019. $30 of that was allocated to fund Capital Projects and make Debt Service payments, including but not limited to the Jail Project, while the other $15 would go to help cover the operational costs at the Jail during the Fiscal Year in which construction was scheduled to begin.

The Jail Project was originally expected to break ground in the Summer of 2020, however that was delayed due to three major factors: 1) The multiple changes in architectural designs in order to keep costs down and stay within the budget; 2) Difficulty in getting final approval on all the Jail's design and features from the State Fire Marshall's Office; and 3) The Coronavirus Pandemic.

However, everything finally started coming together last winter, and in March of 2021, the County Commission approved the issuance of up to $7,225,000 in bonds to pay for the Jail Project. And the timing couldn't have been better...because due to the current strong financial status of Lewis County Government, along with the overall progress and growth of the economy in Lewis County, Moody's Investors Service assigned Lewis County an exceptionally high credit score rating of A1 prior to the sale.

As a result of that excellent credit rating, Lewis County Government was able to get an unbelievably low interest rate of just 1.927% on the bonds it sold. And for a bond sale of this size and term, every tenth of a point in the interest rate makes a difference of over $100,000 in total interest paid. Therefore, with an estimated interest rate of 4% for this same project back in 2019, Lewis County and its taxpayers literally saved over $2.8 MILLION in total interest payments by waiting until now to sell bonds versus selling them two years ago.

Stephen L. Bates, a Lewis County resident and President of Guardian Advisors, LLC, was hired by Commissioners to oversee the County's bond selling process. He said that as both a local taxpayer and a financial advisor, he was "extremely pleased with the credit rating and interest rate Lewis County received." Mr. Bates went on to state that, "during my professional career, this is the lowest interest rate I have seen for a bond sale of this size for a thirty-year term".

County Mayor Jonah Keltner was also happy with the outcome of the bond sale. He stated, "I'm very proud of the strength of our local economy, and especially the financial stability of Lewis County Government, which made this credit rating and interest rate possible. This is a testament to all of our County Officials, Department Heads and Commissioners, who have done a great job managing our County Budget and being wise with our tax dollars the past several years."

A groundbreaking event to kick-off the upcoming Jail Project is scheduled to take place on Friday, May 21, 2021 at 11:00 a.m. at the Lewis County Jail. Actual construction for the project is planned to start later in June, with weather permitting.