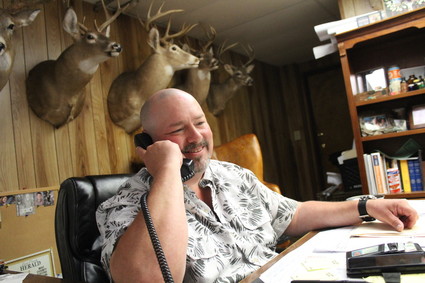 Lewis County Property Assessor Travis R. Hinson speaks with a constituent on the phone from his office desk in the courthouse; the same place his father, Doil Hinson, used when he was sheriff.

Lewis County's property tax base increased by $21.5 million as reported to the state this year. The previous year, the growth was $157.3 million.

"I guess that 2020 was the covid year," County Property Assessor Travis R. Hinson said of growth that was approximately one seventh of the increase during 2019. "But I was blown away that it was still growing."

Continued growth in the value of all properties - the property tax base - is a good thing, Hinson said, because nearly two thirds (66%) of the revenue supporting Lewis County's annual budget is from property tax revenue.

Another way of looking at the property tax base is by calling it what Hinson reports every Jan. 1 to the state. It's the 'total appraised value' of all the properties in the county.

The numbers for those three years are:

Those numbers are from calculations by Hinson's office for tax purposes.

The coronavirus - with a quarantine keeping many people at home - is clearly a big reason for slower growth. Hinson notes construction costs that may bring more growth in 2021.

"Now," Hinson said, "with lumber prices the way they are, it's up..." Forbes magazine reports "Lumber and plywood prices have jumped through the roof in the U.S. [but] building materials prices will retreat in 2022, returning to pre-pandemic levels by 2023."

"With those numbers," Hinson said, "I'm looking ... hoping for more growth" in the property tax base. "There are over 100 new homes built or being built in the last two years, and that's a lot for this county."

An influx of new residents is another reason. Hinson sees them as people escaping Nashville's high taxes on expensive real estate. And, people are moving to Tennessee from California and elsewhere.

Another reason people move to Lewis County, Hinson said, is the lack of land-use zoning. The county has no zoning classification for houses, apartments, duplexes, commercial, retail or industrial buildings. Properties are classified for tax purposes such as the 25% assessment for homes, but that's not zoning regulated by a planning commission and authorized by county commissioners.

"That's a good thing and a bad thing," Hinson said. "People can build whatever they want to, unless there's a deed restriction."

A typical reason for zoning is to prevent a gas station or loud factory being built next to homes.

In rural parts of a county, the state health department requires sufficient land to absorb what's drained from a septic tank.

"Average homes are selling - even after reappraisal - at 30-60% more than the assessor's appraised value on the property record card," Hinson said.

Hinson's office reviews a third of all county properties annually. Then, they combine those values for a new total to submit a reappraisal report filed every five years. The latest reappraisal was compiled a couple of years ago and reported to the state Jan. 1.

Those building blocks of a budget are on the revenue side of a balanced budget that shows money coming in to pay expenditures.

While the property tax base is calculated on the January through December calendar year, local governments use a fiscal year from July 1 through June 30.

Lewis county can't finalize its next budget this month because state officials haven't reported how much money it will allocate for schools, Keltner said. It's typical. Counties have faced the same problem for decades. Spending on schools is typically the largest expenditure for counties.

"Our school board has always done an excellent job in preparing the system's budget," Keltner said.

Even without information from the state, Keltner said the proposed budget "is in good shape." County commissioners' budget committee reviewed revenue and spending plans three times.

The big parts of almost any county budget are for: operation of schools; the general fund for department operations; and the highway fund. It receives state-shared sales taxes, mostly on gasoline. School food service budgets are separate because of funding from the U.S. Department of Agriculture. The solid waste fund is separate, as is the $7,000 drug fund managed by the sheriff.

As with other department leaders here and other counties, Hinson praises his staff. He's also hoping county commissioners will include a new truck in his 2021-'22 budget. His department has always bought used vehicles.