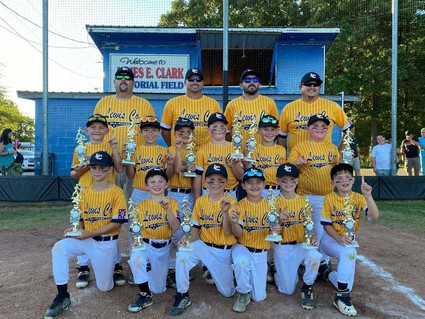 The Lewis County Dixie Youth All-Star seven and eight year old baseball team claimed the District Championship on Tuesday, June 22, 2021 in Summertown when they defeated the Collinwood in the Championship game.

The local All-Stars began the District Tournament in Summertown on Friday, June 18 with a convincing opening round win over Mt. Pleasant 21-0. In the second round on Saturday morning, June 19, Lewis County defeated Decatur County 18-3 and came back that afternoon for their third-round matchup with Collinwood and took down Collinwood 26-10 to reach the semi-finals. On Monday, June 21, Lewis County faced one-loss Wayne County and took the game 18-3 to reach the Championship game. On Tuesday, June 22 Lewis County, the lone undefeated team on the tournament, faced Collinwood for the District title and took the District Championship by a score of 18-2 to advance to the Dixie Youth 7/8 State Tournament in Harriman, Tennessee.

Lewis County begins pool play in Pool 4 on Thursday, July 8 facing Loudon at 3:00 p.m. and Oakdale at 6:00 p.m. Pool play will conclude on Friday, July 9th as Lewis County will play the other Pool 4 team Greenbrier at 1:30. The top 2 teams from each of the 4 pools will begin double-elimination bracket play at 4:30 on Friday afternoon, with the bracket set to be completed on Sunday, July 11. 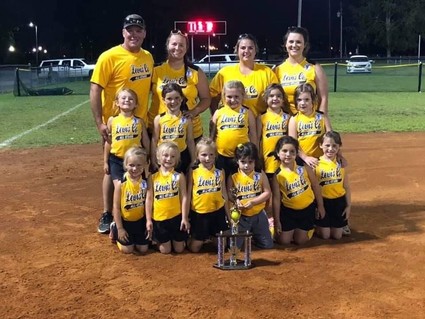 Lewis County opened play on Friday, June 18 facing Perry County and taking a 12-0 win in four innings. The team was back in action Saturday morning, June 19, when they took on Summertown and came out with a 1-0 victory in 5 innings of play. As the only undefeated team entering the Championship round, Lewis County dropped the first of what would be two matchups on Tuesday, June 22nd with Wayne County by a score of 4-3. The two teams played a second game for the district title, and it was Wayne County taking the District Championship 12-11 in the second game. With the second-place finish the 5/6 Sweetees secured a spot in the Dixie Youth State Tournament in Fairview July 16 through July 19.

Lewis County will open play in the double-elimination bracket at 6:30 on Friday, July 16 facing Madison Central. With a win the Sweetees will play the winner of Wayne County and East Hickman at noon on Saturday, July 17 and would face the loser of that matchup at 10:30 Saturday morning with a loss to Madison Central.