Kraemer sworn in as Constable of District 2 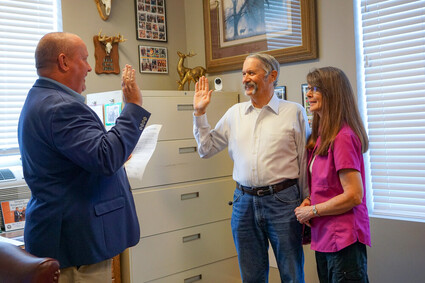 Pictured above is Donn Kraemer being sworn in by County Mayor Jonah Keltner, with his wife, Deb Kraemer, standing by his side.

Donn Kraemer was sworn in on Tuesday morning after being appointed the Constable of District 2 at Monday night's Commission meeting.

Kraemer was nominated by his fellow constables to serve the remainder of Joe Bell's vacated term.

Kraemer graduated with a degree in Engineering and went into the Army with his degree. He later served in law enforcement for many years. Once he and his wife moved to Hohenwald, they both worked at Lewis County Dispatch until their retirement.

Kraemer ran against Mr. Bell in the last Constable race, and came in second.