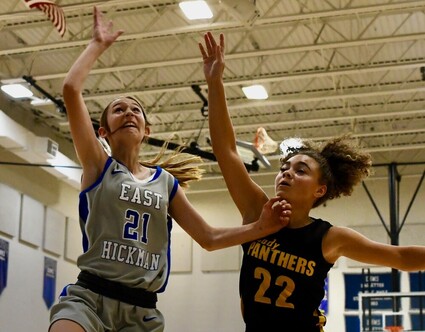 The second half saw more of the same as the Lady Panthers continued to struggle with possessions and East Hickman added to their lead, pulling out to a 45-11 lead moving into the final quarter of action. With a running clock in the fourth, East Hickman cruised to a 51-1131 win in the first round of the tournament.

The boys took the floor in the final game of the night at the EHMS site, facing the host East Hickman Eagles. The Panthers jumped on the Eagles early, outscoring the host team 15-7 in the first six minutes of action, with Jalen Smith scoring 8 in the quarter. The second quarter played much closer as the Eagles hung with Lewis County in the period that saw Drew Ray account for 7 of the Panthers 9 and Lewis County led 24-14 at the half.

East Hickman would begin to trim into the double-digit Panther lead in the third, outscoring the Panthers 12-11 and Lewis County led by 9, 35-26, moving into the final six minutes of regulation. Drew Ray led the way for the Panthers in the fourth quarter with 6 points as Lewis County pulled away to a 50-36 win in the opening round of the tournament.

The Lady Panthers, in the loser's bracket of the tournament following an opening night loss to the East Hickman Lady Eagles, faced the Lady Indians who lost to the Whitthorne Lady Tigers in the opening round. The Lady Panthers started the game on a 6-0 run before conceding a lone free-throw to the Lady Indians and took a 7-1 lead after the first quarter as Emery Norris had 4 first quarter points. The Lady Panther defense continued to apply pressure to Harpeth, again not allowing a field goal in the second and stretching the lead to 17- 4 at the half behind Haylee Carroll's 6 points in the period and led 17-4 at the half.

The Lady Indians hit their first field goal early in the third period but couldn't find the basket again in the period as Lewis County opened up a 32-6 lead with Haylee Carroll dropping 6 more in the quarter. The teams played even at 5-5 in the fourth with a running clock and cruised to a 37-11 win.

The Panthers, in the winner's bracket of the tournament following an opening round win over the East Hickman Eagles, faced the Indians who defeated the Whitthorne Tigers in the opening round.

The Panthers got off to a rocky start in the opening six minutes of action, being held scoreless by the Indians as Harpeth built a 13-0 first quarter lead. Dakota Hull scored all five Panther points in the second quarter as the team continued to struggle on the offensive end, and the Indians took a 17-5 lead in at the half.

The Panther offense came alive in the third quarter with Bo Banks and Drew Ray each scoring 5 and the Panthers outscored the Indians 16-12 to make it an 8-point game moving into the final quarter of regulation. The Panthers again went cold in the fourth, being held scoreless as the Indians pulled away to a 37-21 win.

After their win on Friday, the Lady Panthers and E.O. Coffman squared off in the 5th/6th place game in the bracket. Coffman took and early lead in the opening quarter, scoring the first 10 points of the game and taking a 13-6 lead at the end of the first. Another strong effort from the girls of Coffman in the second quarter added to the lead as the Lady Panthers would trail at the half 21-13.

Jazalyn Conner led the Lady Panthers in scoring with 7 and had 3 rebounds and a steal. Aryn Shepherd had 4 points, 2 rebounds, 2 assists, a steal, and a block, Haylee Carroll 3 points, 6 rebounds, 5 steals, and an assist, Emery Norris 2 points and a rebound, Gabii Ortiz 2 points, 1 rebound, and 3 steals, Addie Osborne 2 points, 3 rebounds, 1 assist, and 1 block, and Sophie Stutts a rebound.

After their loss on Friday, the Panthers and E.O. Coffman squared off in the 3rd/4th place game in the bracket. The Coffman Panthers started the game hot, outscoring Lewis County 14-5 in the first six minutes of action as Dakota Hull accounted for 3 of the Panther points. The cold shooting continued in the second quarter for Lewis County as they were only able to manage a lone Drew Ray basket in the period and Coffman took an 18-7 lead in at the half.

The Panthers began to battle back in the third after the break, With Hull and Ray each having 4 in the period as they outscored the Coffman Panthers 8-7 and were down ten moving into the final period of action. In the fourth Coffman doubled-up the Panthers 12-6 on their way to a 37-21 win. 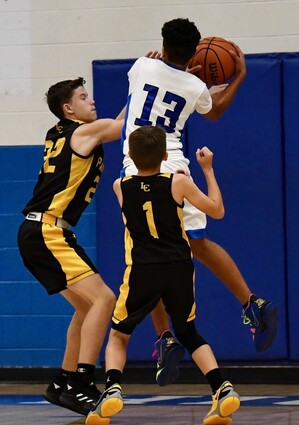