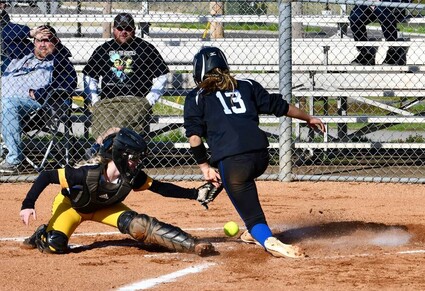 Emma Tinnon would walk to lead off the home first and would make her way around to plate the first run of the game for the Lady Panthers and make it a 1-0 game. Abby Carroll took the mound to start for Lewis County and issued a one-out walk and a pair of two-out walks ahead of a two-run single to give Hickman County an early 2-1 lead. Kerrigan Reeves would reach on a one-out single in the top of the second, but Lewis County could not manage to score. Carroll breezed through the bottom of the second, retiring the Lady Bulldogs in order, and the score remained 2-1 after two complete. Addie Morgan reached on a one-out error in the top of the third but would not move beyond second base. Carroll again held the Lady Bulldogs in check in the bottom of the third, retiring the Hickman County hitters in order and the Lady Panthers trailed 2-1 after three complete. Lewis County could not answer in the top of the fourth as they went down in order and trailed by one at the midway point of the game. Lady Bulldogs would open the game up in the fourth behind a one-out single, an error, and three more singles to score 5 more and take a 7-1 lead. Reeves connected for a one out single and Zoie Clark followed with a single ahead of a base-clearing triple by Tinnon. Tinnon would score later in the inning and the Lady Panthers trailed 7-4 after four and a half. Carroll hit a batter with one out in the fifth and issued consecutive walks to load the bases but came back to retire the final two outs without allowing a run. Piper Belvin reached on a walk to start the Lady Panther sixth, but the next three batters were retired in order and Lewis County trailed 7-4. Carroll pitched out of a two-out jam to hold Hickman County scoreless in the home sixth. Morgan would collect her second hit of the afternoon with one out in the seventh, but Lewis County could not mount a comeback and took the loss 7-4.

The Lewis County Lady Panthers travelled to Perry County to open their 2022 softball season against the Lady Vikings on Monday, March 14th.

The Lewis County High School Lady Panthers travelled to Parsons for a matchup with the Decatur County-Riverside Lady Panthers on Thursday, March 17th.

Emma Tinnon led the game off with a single and Piper Belvin came up with a one-0ut single ahead of a Keira Halbrooks walk, but the Lady Panthers failed to score in the first. Kerrigan Reeves started the game on the mound and worked a scoreless first. Lewis County went down in order in the second, and Reeves managed to work around a leadoff single in the bottom half to keep the game scoreless through two. Bria Wilcutt started the top of the third with a walk but was cut down trying to pick up a base later in the inning, and Emma Tinnon connected for a double, but the Lady Panthers were again kept off the board. Riverside would bat around in the bottom of the third, coming up with 3 two-out singles with bases loaded to plate a total of 4 in the inning to take a 4-0 lead. Lady Panther batters went down in order in the fourth, all by strikeout, and trailed by 4. Reeves worked around a leadoff single in the home fourth to keep the score 4-0. Reeves walked to lead off the fifth and was caught up trying to advance, and Bria Wilcutt walked and was caught stealing to end any threat the Lady Panthers tried to make to score. Riverside would again send nine batters to the plate in the bottom of the fifth with 2 singles to start the inning and would go on to pick up 4 straight one-out singles and a walk that would plate 6 in the inning and bring the game to an end by run-rule, 10-0.

The Lewis County Lady Panthers returned to action on Monday, March 21st as they hosted the Santa Fe Lady Wildcats.

Abby Carroll took the mound for Lewis County and gave up a one-out single and double but struck out the final two outs of the first to hold the Lady Wildcats scoreless. Emma Tinnon got things started for the Lady Panthers with a leadoff double to left and Jayden Moore walked ahead of a two-run double by Piper Belvin. Anna Kate Duncan Plated Belvin with a double to left and Kerrigan Reeves would bring home Duncan on a one-out double to left-center. Claire Whitehead doubled with two down to plate Reeves, and after a walk to Bria Wilcutt, Emma Tinnon connected for her second double of the inning to bring in a run and stake Lewis County to a 6-0 lead. Carroll would induce three straight groundouts to the shortstop Tinnon to sit down the Wildcats in order in the second. Duncan drew a one-out walk and Keira Halbrooks followed with a single. Reeves drove in Duncan with a single and Chloe Stewart drew a walk. With two outs in the second, Wilcutt came up big with a two-run single and Tinnon followed with a two-run triple to give Lewis County a 11-0 lead moving into the third. Carroll would work around a one-out single to end the inning, striking out 3. Belvin drew a walk to start the home third and Addie Morgan walked with one out. Zoie Clark brought home Belvin with a single and Trinley Greene followed with a walk. Lewis County would add two in the third to make it a 13-0 game, and Hannah Dupont started the fourth being hit by a pitch and Jayden Moore brought her in with a single. In the fourth inning Carroll made quick work of the visitors by striking out the side in order. The Lady Panthers would get a pair of singles with one down from Duncan and Morgan and extend their lead to 15-0 after four complete. Santa Fe would get on the board in the fifth, and final, inning. An error and 2 singles followed by a walk started the visitor fifth, and all three baserunners would cross the plate on a one-out double. A two out single would add another run for Santa Fe but the Lady Panthers would end the game by run rule by a score of 15-5.

The Lewis County Lady Panthers traveled to Lyles for an afternoon matchup with the Lady Eagles at East Hickman High School on Thursday, March 24th. 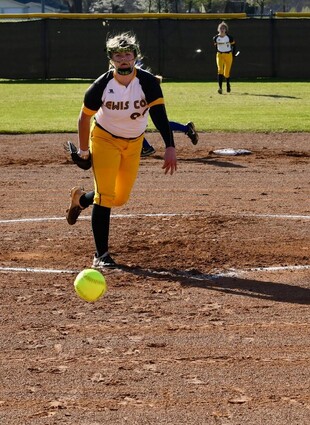 Emma Tinnon led the game off with a walk and would advance on a Piper Belvin single, but the Lady Panthers would strand a runner at third and fail to score. Faith Wishaw started the game on the mound for Lewis County and issued four straight walks to start the game and a one-out walk that would lead to 3 early runs for the Lady Eagles. The Lady Panthers went down in order in the second. Lewis County would commit 2 costly errors in the second that would add a run in the home second and give East Hickman a 4-0 lead. A two-out single by Tinnon gave Lewis County a baserunner in the third but they were unable to move her around and remained scoreless through three. Wishaw worked around a one-out walk to keep the score 4-0 through three complete innings. Anna Kate Duncan connected for a one-out double to center but was left at second when the inning ended in the top of the fourth, and Wishaw would breeze through the home-half in order. In the fifth Lewis County would pick up a run as Bria Willcutt singled and stole two bases ahead of a groundout by Claire Whitehead that brought her in and made it a 4-1 game. The bottom of the fifth started with a single, a walk, and a single that scored 2, and a pair of one-out walks and a single plated two more to extend the Lady Eagle lead to 8-1. Jayden Moore started the home sixth with a single, and one-out singles from Duncan and Keira Halbrooks would load the bases. With two down in the inning, Wishaw was hit by a pitch to plate Moore and Willcutt drew a walk. Addie Morgan brought home two with a single and Tinnon drew a walk to load the bases again. Moore walked and brought in a run, and Belvin singled to plate another, and Lewis County trailed 8-7 moving into the bottom of the sixth. The Lady Eagles went down in order in the sixth and clung to a one-run lead moving into the Lady Panthers' final at bat. Halbrooks started the seventh with a single and would move to third after a two-out single by Willcutt, but the Lady Panthers were not able to score the equalizerand dropped the final 8-7.