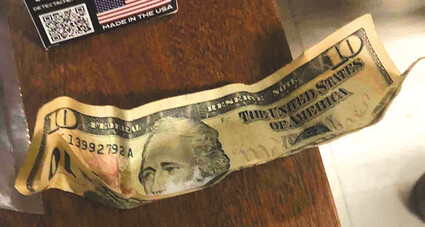 DRUG MONEY: This ten-dollar bill-which served as a pouch for illicit drugs that tested positive for the dangerous Fentanyl-was discovered Friday by a maintenance worker at Mousetail Landing State Park. See story.

Authorities aren't sure if recent discoveries of drug-laced money in public places is an intentional act or accidental, but it is a problem that everyone needs to be aware of in order to avoid exposure.

In the past couple of weeks, two one-dollar bills and a ten-dollar bill with a powdery residue have been found-and all three tested positive for methamphetamine and the powerful drug, Fentanyl.

While accidental exposure might not be dangerous (though this opinion varies according to the source), Perry County Sheriff Nick Weems urges caution if you happen t...