Learn about and know your rights

Next week, September 17 through September 23, 2022, has officially been deemed "Constitution Week" here in Hohenwald by Lewis County Mayor Jonah Keltner, with the help of local members of the Daughters of the American Revolution, Kitty Thomas and Kathryn Kozlinski.

According to their website, DAR is both a non-profit and non-political volunteer women's organization. They were founded in 1890 and have dedicated themselves "to promoting patriotism, preserving American history and securing America's future through better education for children" ever since.

The organization prides themselves on serving and supporting active duty military personnel and veterans. They provide scholarships, aide in tracing genealogy and help provide patriotic education.

The DAR's aim with Constitution Week is to celebrate one of America's most important documents that "stands as a testament to the tenacity of Americans throughout history to maintain their liberties, freedoms and inalienable rights."

Celebrating Constitution Week was started in 1955 when the DAR petitioned Congress to officially and annually name September 17-23, "Constitution Week," which was later adopted into public law on August 2, 1956, by Dwight D. Eisenhower.

The DAR states that their goals of celebrating Constitution Week is to "emphasize citizens' responsibilities for protecting and defending the Constitution; inform people that the Constitution is the basis for America's great heritage and the foundation for our way of life; and to encourage the study of the historical events which led to the framing of the Constitution in September 1787. 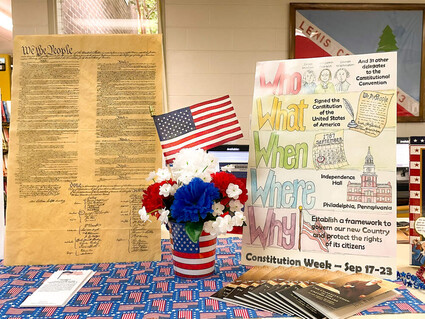 • Jonathan Dayton, of New Jersey, was the youngest to sign the document at only 26 years old

• The oldest to sign the Constitution was Ben Franklin at 81 years old, and required help to put his pen to paper.

• Delaware was the first to ratify the Constitution while Rhode Island was the last of the thirteen original states.

• It is the oldest and shortest Constitution of any major government in the world.