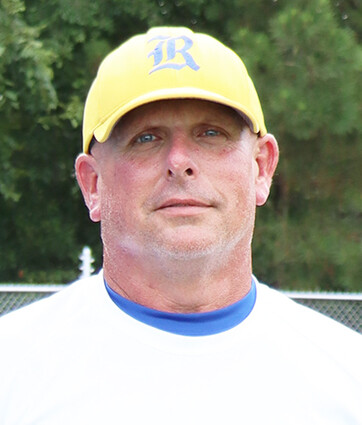 My father-in-law, Larry Quinn, was the very first quarterback at Riverside High School. He's an avid sports fan who loves to win. I always give him a coach's shirt so that he looks like a member of the staff.

While I was at Community, he never missed a game, no matter how far away we were playing. We were in the first half playing Silverdale Academy at our place and the game was tied. We ran an inside zone play and our kid takes it about 75 yards to the house.

Two Silverdale kids were right behind him, side by side. About 10 feet behind them was one of our players. Well, the two Silverdale kids bumped into each other and both fell to the ground. The ref threw a flag, saying that our trailing kid tripped them up, negating the touchdown.

Some fan comes down from the top row of the bleachers, goes out onto the field, picks up the flag puts it in the ref's pocket and then puts his arm around the shoulders of the ref. After taking a closer look, I realized the guy was my father-in-law. They stand there for 15-20 seconds, just chatting away. As it turned out, my father-in-law never got flagged for going out on the field. But I did ban him from the rest of our football games that year. This story has taken on a life of its own.

My nephew, Eli Quinn, graduated here at Riverside in 2020. Despite the fact that he has downs syndrome, he's always given the pregame speech to our football team.

At each of our games, after I say my piece and the other coaches say something, then I give Eli five minutes to absolutely get the kids so fired up. that We've actually recorded some of these events. Sometimes, I have to walk up and put my arm around him and let him know that his time is up. He quite often wants to go over his time limit.

We decided his senior year that on senior night, we'd see if the opposing coach (Cary Crews of Wayne County) would let Eli run the opening kickoff back for a touchdown. Coach Crews was all for it. He's just that kind of guy.

Eli and his younger brother Ethan lined up deep to receive the kickoff. Ethan caught the kickoff and handed off the ball to Eli. We had a little wedge set up, Wayne County players were diving at him but missing he as he progressed down field. Eli ended up going about 75-80 yards for the score.

Everyone on both teams surrounded him in the end-zone. He did this little thing where he jumped up and spiked the ball and players on both teams immediately fell to the ground like he'd knocked them down.

It makes me just want to tear up right now, three years later. Things like that are the best part of my job.