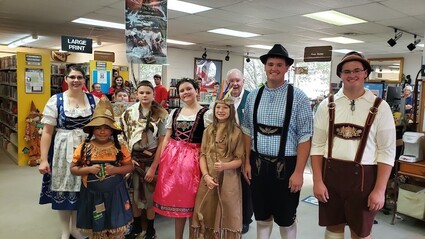 A costume contest was held during the Oktober Heritage Festival the past weekend. The contest was judged by Burgermeister Jeanette Shanes and Janet Turner. Winners were announced at the opening ceremonies and were presented a monetary prize by Chamber of Commerce Director Debbie Landers. Winners were Arabella Grace Ripley for best applachian girl; Christopher and Hadley Spitzer tied for bestGerman/Swiss boy; and Seth Amick Ward for best Native American.