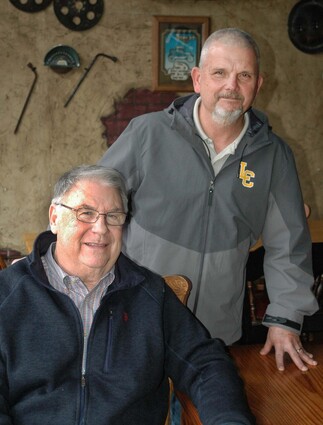 Terry Bunch is certainly one of the most successful people that has ever worked for government in Lewis County. He is without question well liked, respected and loved for the way he has handled top leadership roles in the community. "But it's finally time to hand the reins over to someone new," said Terry, "in this case to a good friend, another former Mayor, this time of the City - Johnny Clayton - who will take over running the Hohenwald Housing Authority in a matter of weeks after we have done a couple of weeks training."

"It's a great opportunity," said Clayton, who until recently has been assistant to the County Mayor. When asked if it would be difficult taking over from Terry Bunch he replied, "Actually it's easier than I thought it would be, typical Terry Bunch, everything is in perfect order at the Housing Authority, so it was much a case of holding on to the reins and running with it, but hard shoes to fill, he has so many friends."

The 70-year-old Bunch was born and raised in Hohenwald, He played all sports growing up and was named to All State football in 1968. He received a football scholarship to Vanderbilt and graduated from Lipscomb University in 1973 with a BS in Business Management.

He then moved back to Hohenwald, and joined a family-owned business, Hohenwald Tire Company, which has been in the same family since 1953....69 years.

Bunch served as Lewis County Executive from 1990-2002 and has served as Director of Hohenwald Housing Authority since 2007.

And if that wasn't enough for the hard working Mr. Bunch, he was one of the original board members of the Chamber of Commerce, and was a Volunteer Fireman for 20 years, serving as assistant chief for several years. Bunch was head coordinator for Octoberfest for three years, served as Elder and Deacon for the Hohenwald Church of Christ for 25 years, and served on numerous boards - most recently Lewis Health Center Board serving as Chairman for six years.

Happily married to Judy James Bunch for 51 years, they have two daughters, Jenny Adcox and Rachelle Cabading, along with three granddaughters and one grandson. "And with the house being sold here in Hohenwald," said Terry, "we look forward to moving to Columbia to be close to the family and of course the grandchildren."

So after reading all of that, this town and this county of Lewis should be ever grateful to Terry Bunch for the tremendous amount of work he has contributed over the years. As mayor of the county and for his work over the years and dedication to a political lifestyle, he should be recognized as a shining example of "Local Boy Does Good" and young people of today should put him forward as the best "mentor" of just what they can achieve with their lives.

The county salutes you Terry and wishes you and your family a very happy retirement. And of course good luck to former City Mayor Johnny Clayton who now takes over as Director of Hohenwald Housing Authority, a job that we all know he is very capable of doing.