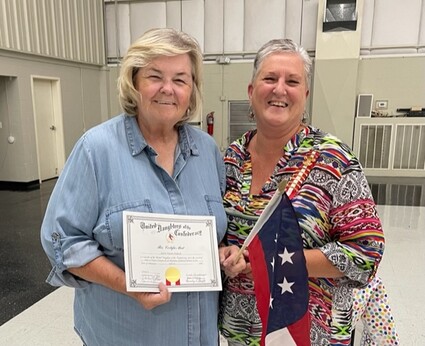 Confederate Gray 2681 of the United Daughters of the Confederacy(R) met Thursday, June 9, 2022 with eight members and two guests present.

Business was conducted and Cynthia Kilpatrick reported on the placing of flags for Memorial Day on the graves of the soldiers of all wars who are buried in Lewis County.

President, Darlene Johns, conducted a new member ceremony and welcomed Sallie Pollock to the UDC family upon the service of her ancestor, Julius A. Taylor, Company H, 21st Regiment, Tennessee Infantry. Refreshments were enjoyed at the conclusion of the meeting.

The United Daughters of the Confederacy is the oldest heritage organization in the country, having spent 126 years engaging in the fields of Education, History and Charity. As a patriotic organization, the UDC honors and upholds the United States of America and respects its flag.