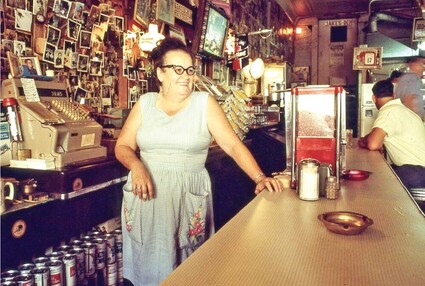 Tennessee Music Pathways will honor the life of Hattie Louise "Tootsie" Bess with the dedication of a Music Pathways Marker for her on Wednesday, January 25 in Hohenwald at the corner of Maple Street and Main Street at 11:30 a.m.

The Tennessee Music Pathways program identifies, explains and preserves the musical legacy of the state by placing these beautiful signs that connect us to the people, places and events that shaped our music history.

Lewis County is proud to celebrate the life of "Tootsie" who was born at the edge of the county on August 23, 1913. The family resided on Maple Street in Hohenwald. Tootsie married in 1931 in Hohenwald and resided in the Lomax Crossroads area until 1940 when she moved to Nashville.

There she married Grover "Big Jeff" Bess and became the onstage comedian and manager for his band, The Radio Playboys, in 1946.

They took over the lease of a club on Lower Broadway street which eventually became known as "Tootsie's Orchid Lounge". This club was across the alley to the backstage entrance of the Ryman Auditorium. It was here that Tootsie became famous in the country music world (specifically to the Grand Ole Opry performers) by loaning them money, forgiving bar bills and offering sympathy and encouragement to a generation of songwriters and musicians between the years of 1960 and 1978.

In addition to the unveiling of the Music Pathway Marker, on the same day at 11:00 a.m., a portion of Highway 48 will be dedicated to Tootsie.

Come spend the day in Hohenwald visiting the sites and meeting with members of her family and others who fondly remember "Tootsie".

Tennessee Music Pathways connects visitors to the people, places and genres that make Tennessee the Soundtrack of America. A statewide driving tour, the Pathways represents hundreds of landmarks across the state and spans seven genres of music: blues, bluegrass, country, gospel, soul, rockabilly and rock 'n' roll. From the largest cities to the smallest communities, Tennessee Music Pathways identifies and preserves the unique musical history throughout all 95 counties of the state. More than 500 possible locations for markers have been identified including birthplaces, resting places, hometowns, high schools, churches and locations of first-known recordings or performances of the musical pioneers and legends influenced and shaped by Tennessee.

Visitors can curate their own path based on musical interests through an interactive online guide at tnmusicpathways.com on tnvacation.com.