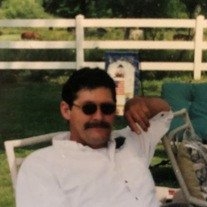 John was born on October 22, 1955, in Hampshire to the late John Owen and Mary Bell Sharpe Davidson who survives him.

John, or as some knew him "Johnny" or "Johnny D.", loved to seek out "hidden treasures" or picking as we might call it. He also loved to fish and tinker with cars.

John worked for many years for BE&K construction as a pipe-fitter. After that he spent time working for Sonic Builders of Hartsville, helping to build Sonic restaurants all over the Southern United States. John was of the Christian Faith.

A graveside service honoring John was held on Tuesday, April 14, 2020, at Polk Memorial Gardens. Due to COVID-19 requirements from the CDC, the family dispersed information privately. Pastor John Rawdon officiated.

John was preceded in death by his father, John Owen, and his brother, Randy Davidson.