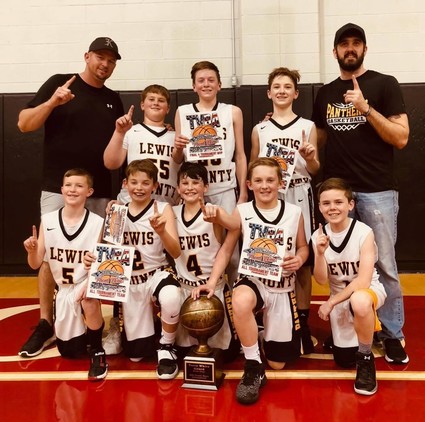 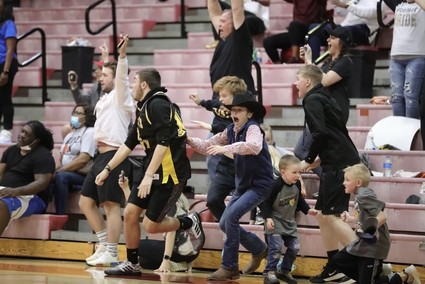 Onlooking fans excitedly jumped to their feet and shouted with joy as the last buzzer went off, signaling a big win for the LCMS Panthers.

The TVBA 6th Grade Upper Division Final Four was held at Muscle Shoals High School in Muscle Shoals, Alabama on March 14th and 15th to crown the TVBA Champion for the division. In the semifinal round, the Panthers took on the Muscle Shoals (AL) Trojans and won by a score of 40-31 to secure a spot in the TVBA Championship on Sunday night, March 15th. The Panthers would face the Florence (AL) Falcons once again in the Championship game. The Falcons took a lead early in the game and stretched out to an 8-point lead. But the resilient Panthers continued to chip away at the lead and overcame the Falcons in the second half. Down the stretch late in the second half the teams exchanged the lead as the pace picked up and the lead went back and forth. A Dakota Hull free throw with under a minute to play tied the game at 40. A defensive stop with a Hull steal with 14 seconds remaining gave the Panthers the ball and an opportunity to win in regulation. After a deflected pass went out of bounds, the Panthers had possession in the frontcourt with only 7.4 seconds remaining setting up an incredible finish. Bo Banks inbounded to Phenix McDonald who swung the ball to Kobe Feichtinger. Feichtinger hit Banks on the left wing who went back to Feichtinger at the top of the three-point line. Cut off, Feichtinger spun away from a defender and released a shot just before time expired and connected for a game-winning three-point basket to win the TVBA Championship in dramatic fashion, 43-40. Members of the Lewis County Panthers named to the TVBA All-Tournament Team were Phenix McDonald, Maddox Tanner, Bo Banks, and Kobe Feichtinger, and Dakota Hull was named Tournament Most Valuable Player.

The Lewis County Panthers were back-to-back TVBA Champions with Championship wins in 2020 and 2021.