Panthers hold off Mustangs in thriller

#70 Zander Friersen and #51 Hunter Smith on the tackle

The Friday night game was a back-and-forth physical and close matchup between the two rivals. The visitors from Loretto struck first three minutes into the opening quarter when quarterback Carter Daniel connected with Caden Porter on a 39-yard touchdown pass and Patton Simbeck converted the point after to give the Mustangs a 7-0 lead early.

It would be the second quarter before the Panthers responded. With 9:21 to play in the first half, Lewis County's Lincoln Brewer broke through the Mustang defense on his way to a 19-yard touchdown run and Blake Carroll added the point after to tie the game at 7.

The game would remain tied until early in the fourth quarter when Brycen McDonald found Blake Carroll in the back of the endzone for a touchdown and Carroll added the PAT to give Lewis County a 14-7 lead.

Loretto would answer moments later on a 16-yard touchdown run by Porter and Simbeck point after to tie the game.

Loretto would manage the clock and pick up big first downs on subsequent drive, moving deep into Panther territory. With :08 seconds on the clock, Daniel found Jack Welch in the front corner of the endzone for a 19-yard touchdown pass. Loretto lined up to go for two, and the win, but the Panther defense forced an incomplete pass.

Loretto, in desperation, kicked a successful onside kick to regain possession, but the Panther defense fended off the final attempt to seal the win 21-19. 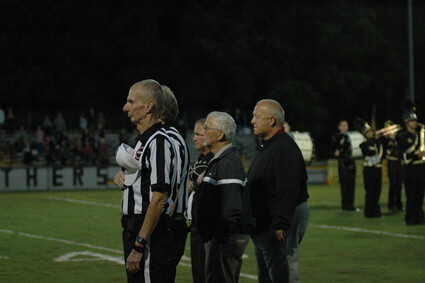 Lincoln Brewer had 133 yards on 15 carries and 2 touchdowns, Blake Carroll had 12 carries for 100 yards, Kael Feichtinger 66 yards on 12 carries, and Brycen McDonald 1 yard on 3 carries. Brycen McDonald completed 4 of 5 passes for 18 yards with 1 touchdown and 1 interception. Kael Feichtinger had 1 reception for 12 yards, Dyer Barnes 1 reception for 7 yards, and Blake Carroll 2 receptions for 2 yards and a touchdown.

The Panthers return to action at Bobby W. Sharp Stadium on Friday, October 1st when they host Adamsville at 7 p.m. preceded by Homecoming activities at 6:30 p.m.