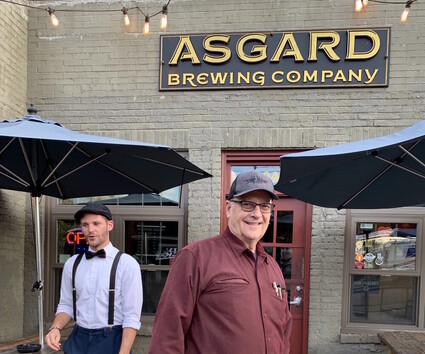 Dr. Steve Porter, founder of a family brewery on the Duck River, invites prospective business partners to visit Asgard Craft Brewery, Columbia. At left is Matthew Steigelman, a professional photographer with other talents.

Municipalities near the Tennessee-Alabama line are potential growth areas for a brewery operating along the Duck River in Columbia, the business' founding father announced recently.

From Fayetteville and Huntsville, west to Centerville, Hohenwald and Jackson, and south - county seats around the state line - toward Florence are Asgard's potential growth areas, Asgard Brewing's founder says.

Dr. Steve Porter of Asgard Brewing says he wants local business partners, historic architecture, a town with a story and outdoor sports. "If I rent," Porter says, "I have to have an option to buy."

Hohenwald's German and Swiss heritage interest him because they're "an ethnicity and profile of people who like beer. So, that's Lutherans, Catholics, Germans and Episcopalians, and there's a lot of those."

A location there or Centerville "may be seasonal ... open only Thursday, Friday and Saturday initially to catch the weekend crowd, but I think it ... will be successful. There are tremendous margins in beer."

Tennessee law includes a limit on brewery capacity, so serving tap rooms elsewhere could lead to another brewery to increase volume for local sales and more tap rooms.

"By having another facility ..." he said, "I get to restart that 'clock' to another 1,700 barrels," the limit he faces. He mentioned the possibility of having "four more subsidiaries.

"I want to go to Florence," Porter said at a picnic table in front of his brewery. Florence has had several breweries. Since a rising tide floats all boats, Porter says his business grew with a second brewery in Columbia: Bad Idea Brewing. To expand, Porter emphasizes that he wants local partners. He will invest 60% of the expansion costs with partners providing up to 40% of the project's cost. Florence is "cool" with a dam on the Tennessee River, the Shoals and a music scene; just west of Huntsville, headquarters for U.S. Space Command, SPACECOM, Porter said.

"I had some rocket scientists come and wanted me to go to Athens, Ga. ... Florence would be better. It's a definite tourist destination ... They've got wonderful hotel housing there ... [and] a great park right downtown on the river. I would do well down there, but I don't want to get my trap lines too far away.

"This is the mother ship," Porter said in Columbia. "I'm looking to expand production in this town so I can accommodate some of those outlier facilities."

Fayetteville, and parts south to Alabama's border, has been a favored homesite for Huntsville's space science workforce because Tennessee has no income tax. The FBI has aired help wanted ads on Huntsville radio stations. "Not everybody wants to move from the Northeast," Porter said. Security is just one job growth area since SPACECOM landed early this year.

"I will not rent," Porter said. He avoids landlord rent hikes on tenant renovation.

It happens. A proprietor rents, paints, opens, renovates, flourishes and closes over a landlord's rent hike justified by increased value.

"It's got to be a friendly program where I can get in there and have low overhead cost and typically, you see that," he said. Utilities, property taxes; everything is more affordable in Centerville, Hohenwald, Fayetteville, Dickson, and Shelbyville. A distillery recently opened in Bedford County.

Porter accepts the business premise that competition is good. Restaurants flourish when they're in proximity to each other. Same with breweries. And Porter anticipates more breweries in Columbia.