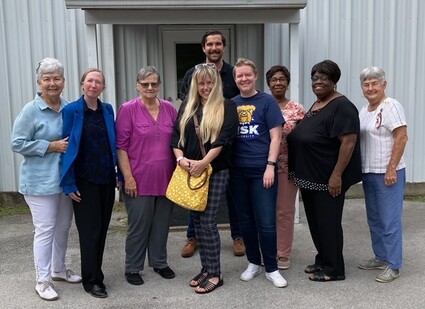 In 1917 Julius Rosenwald, philanthropist and President and Chairman of Sears Company, established the Rosenwald Foundation. He sympathized with the plight of African Americans and with the encouragement of Booker T. Washington began a program to build schools in rural areas for these children. In July 1929 the new school in Hohenwald opened as a two teacher building with two well furnished classrooms, restrooms, kitchen, and modern heating equipment. As there were never enough children for two teachers, a stage and the extra room became an auditorium. In 1964 the Hohenwald Colored School was consolidated with the Hohenwald Elementary School and Miss Eula Gray Allison was instrumental in helping start the first County Kindergarten classes in this building. Later, this building became the Lewis County Senior Citizens Center.

Bill Webb, the present director of the Senior Center, conducted a tour of the building. Among those present were two students who had attended school there, Linda Mitchell and Frankie Mitchell. They were able to give the exact layout of the building when it was the Rosenwald School and to reminisce about their days as students in the school.