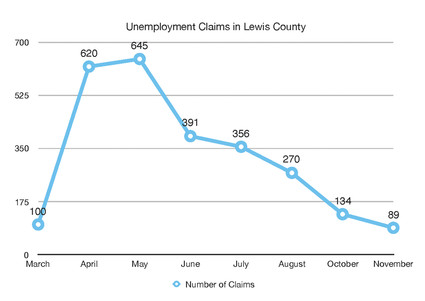 From mid-April to mid-May, Lewis County had a record unemployment claims of 706 on average. That's nearly six percent of the county's total population.

The highest week of unemployment claims was the week of April 25th at 687 continued week claims and 61 total initial claims, which makes a total of 748.

Continued week claims represent the number of people who already filed for unemployment, are covered by unemployment insurance and have been receiving benefits.

Initial unemployment claims are reports that measure the number of new jobless claims filed by individual persons, according to Investopedia.

However, these numbers do not reflect the number of individuals that have exhausted their benefits or those who were not eligible for unemployment insurance.

It is best to look at the amount of claims in a period of four weeks, rather than one in order to obtain a more accurate snapshot of our economy.

Lewis County saw a huge decrease in numbers with an average of 134 unemployment claims for the month of October.

Last week the U.S. Department of Labor revealed that Lewis County's rate of unemployment had dropped dramatically since the beginning of the pandemic. There were 66 continued week claims and 18 total initial claims, making a total of 84 unemployment claims.

The Department of Labor releases their numbers every Thursday around 8:00 in the morning.

In March, President Trump signed COVID relief funds into law through the CARES Act. This allowed states to provide unemployment for many individuals who found themselves to be out of work during the pandemic, including some who would not have been covered under unemployment insurance otherwise.

The state of Tennessee typically offers 26 weeks for those who are unemployed to be covered by unemployment insurance. The CARES Act extended that coverage by up to 13 weeks, but the program was set to end in December of this year.