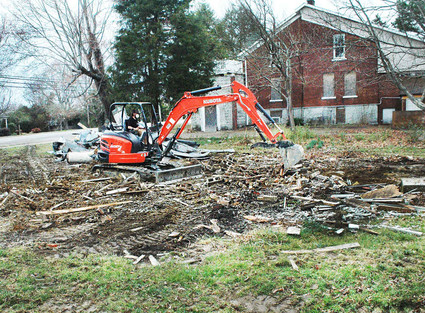 Meriwether Lewis Monument, right, taken in 1925 during dedication ceremonies (when the monument became the first National Monument in the South). Left to right are P. E. Cox, State Archeologist; John Trotwood Moore, State Librarian; Governor Austin Peay; and it is believed that the whiskery old man is Mr. Cooper (the son of Robert Cooper).

After years of sitting abandoned, and after endless owners who thought they could restore it, one of the oldest houses built in Hohenwald was finally pulled down last week to be replaced by two new houses. The house, sitting next to the Boyce Clinic at 209 South Park was built in 1905 by A.B. Cooper, grandson of Lt. General Robert Melville Cooper, who served under Andrew Jackson at the battle of New Orleans and who made the nails for Meriwether Lewis's coffin. Robert Melville Cooper said at the time, "The people of the house where Lewis killed himself sent to my brother's shop to get nails...