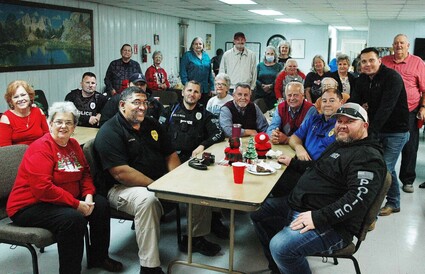 City Mayor Danny McKnight with Police Chief Kip Kelsey, Senior Citizens Director Bill Webb and a host of Police Officers join for the after dinner picture at the Senior Citizens Center though it looks as if most of the senior citizens have already headed for the sofa.

To many people driving down 412 this past week, you would have thought there was a major police drug raid taking place with up to seven or eight police cars surrounding the Senior Citizens Center building.

Not so, as Hohenwald Police Chief Kip Kelsey explained, as a dozen or more of his officers served Christmas dinners to around a hundred Senior Citizens inside.

Hohenwald Police Department's Blue Christmas was "incredible!" said Senior Citizens director Bill Webb, "as well as the hundred or so meals served and distributed by the police themselves to the senior citizens, there were frui...